Sentimental Sunday... The Hero Learned to be Humble Early

One of the Hero's favorite story subjects was the car he and his twin brother shared.  Their mom nicknamed it "Flattery"  on the premiss that  “Flattery will get you nowhere!”  According to both men, the car was always breaking down.  This story in particular was about the Hero and his brother planning to be "cool". 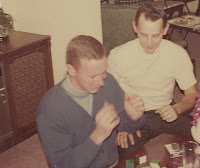 Only those from the 50's and 60's will understand cruising the drive ins.  I told you before about Prince's Drive In in Houston.  It was a regular thing for young men to cruise a specific area that they lived in checking out the girls and hopefully being checked out by the girls. This evening, there was a girl the Hero wanted to impress. They started cruising nonchalantly around where the girl in question was parked.  They were cool in Flattery, their 1951 Chevy 4 door sedan, black, with black interior. All systems were go, the Hero was driving, arm on the window seal, leaned back, cool.  Sputter, Sputter... Oh no! the engine went sput. They found themselves at a standstill, they had to get out and push the car to the side.  Not cool, but a great character maker.  The brothers could look back at the time and see it as a learning experience.  The car did not make the man.  It did help mold him however. ; )


A side note... The Hero's mom is so excited.  She is going to be a model in a fashion show at her assisted living facility.  I am so excited for her 91 and moving closer to 92 in just 2.5 months.  Now this is living.
Posted by FranE at 6:00 AM

Email ThisBlogThis!Share to TwitterShare to FacebookShare to Pinterest
Labels: Flattery, Sentimental Sunday, The Hero and Humility