Sentimental Sunday The Hero's First Gift To His Son-in-law

I first met the Hero when I had been courting his third daughter for roughly a month, and I was faced with an interesting opportunity. The Hero had traveled to Idaho from Texas for a baby blessing (twins!), and this would likely be my only opportunity to ask his permission to marry his daughter. The issue was that I didn't know yet whether or not I was going to ask her. The Hero took us to dinner at a Mexican restraunt, and we had a pleasant evening, as he tried to ask what my intentions were towards his daughter, and I tried to say I might marry her without saying it in her presence. To set the mood when we arrived, the Hero remarked to Fran (within earshot of the waitress, which I'm sure was intentional) "My mistress is going to leave me if she finds out I'm out with you again." This gave me some understanding of his personality. 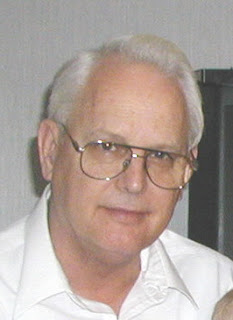 The remarkable thing that will always stick with me was his reaction to my question about possibly marrying his daughter. I was expecting something like "How will you support my daughter?" or something similar. He never asked about that. I was surprised to be asked about my testimony and faith in Jesus Christ. That's what was important to him, and really all that matters. That's just who he was.
Posted by FranE at 8:00 AM