52 Ancestors Weeks Challenge: Week 6; The Story of Bessie Langley As Told By Her Granddaughter 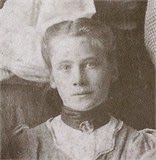 When Bessie Della Langley was born on December 4, 1895, in Rayville, Missouri, her father, Benedict Langley, was 43 and her mother, Sarah Jane Hankins, was 39.
This story was related to me by Debra West-Mouze granddaughter of Bessie Della Langley Lane Bowen in 2003. The second generation of descendants in Oklahoma had lost contact with Bessie when she moved to California.  It was a great blessing when she found me on Rootsweb and began to correspond with me. I have lost contact with her, but hope to find her again. She said they have some pictures but we lost contact before she shared. The following is as she told the story to me along with excerpts from my paper trail research. This is long and I hope not too hard for you to read, as I chose to go with the story inserting genealogical proofs along the way.
Debra: My grandmother told me many stories about her life in Oklahoma and in California, most of them were short and many had lessons in them about life. The stories gave me just a glimpse of what her life was like raising 6 children during the 1920s to the 1940s.  They followed the fruit, living in their car, in tents, and in rented homes never having quite enough to buy a home. There were times they went to bed hungry.  I knew her as a private independent woman, with a strong belief in God and doing the right thing.  I never knew her to lie; she would not even lie about Santa Claus (much to my parents dismay), telling me at the age of 5 that there was no such thing!
I don’t know how old my grandmother was when her family moved from Missouri to Oklahoma, but she told me that she remembered the covered wagon trip and walking alongside the covered wagon with her siblings. [Here we can insert what we do know…]
In 1900, her father, Benedict, and mother, Sarah, were in Cloud Chief Twp., Washita County, Oklahoma with 5 of their children enumerated. Bessie would have been 5; she is not on the census. ( yes, I looked on the next page) . The note that Sarah had 5 children and 5 were living was added later, this was not in original pen. This was, however, what prompted me to tell Debra, I had been wondering if Bessie was a niece or something as I could not find her. Maybe it was dad giving the information and he forgot to add the little one, maybe the enumerator forgot to put her on the form. Who knows?  We do know that she was born in 1895 in Missouri and they are in Oklahoma in 1900.  My thoughts are they came to Oklahoma for the Land Rush in April 1899 and apparently did not obtain land as in 1900 he is renting.

Continuing with the narrative… In Oklahoma, Bessie married Julius Lane when she was 14 or 15 years old, it was an arranged marriage and had something to do with a land deal.
Again, we have a paper trail… Someone was telling a story on the license. The marriage happened at her Sister Annie Bright’s, the witnesses were her brother in laws and brother. She is listed as 18 on the license BUT her birth date puts her at 16, which would go with her story.
I am not sure about the land deal; Benedict did own a farm in 1920 according to the census. Maybe that is how she felt or maybe it was a deal.  (After hearing this story, I did ask and someone told me this did happen in Missouri… wouldn't you know it… cannot find the reference.)
When she was 17, she gave birth to twin boys, Willie, and Charlie. January 19, 1912. Willie was born small but fine and Charlie was born with cerebral palsy, my grandmother had a very hard time with the births and was in and out of consciousness for several days. [This portion of the story came from Debra’s mother because her grandmother would not talk about her first marriage, so Debra said the information was a little confused at times…]   Julius was very upset about the birth defect and after my grandmother recovered, he was quite mean to her blaming her for the defect. Walter, her brother came over and had a talk with Julius.  Shortly after, Julius left her and she returned to her family.

We are fortunate to have pictures of them with their grandmother, mother and aunts.

Back to Debra’s narrative… A few years later my grandfather Lowery Bowen entered the picture. He was a field hand working for her father.
Lowery Bowen was kind and gentle, but somewhat lazy. Bessie could not get him up to go to work in the morning.  She complained to her family and , late one night a group of men in hoods on horseback came and drug him out of the house and threatened to ride him out of town on a rail if he did not get out to work like a man and care for his family.  After that night, Bessie never had to get him up; he was up and out before dawn. Bessie thought that one of the men was her brother Walter, but was never told for sure.
(Now that I know about the Anti Thief Association, and their documented membership, Bessie's story points to at least who one of the masked men was.)

Debra said Bessie also told her that the territory was very rough, that you never traveled on the road without a handgun for protection against highwaymen, and that she remembered several town hangings.  Her daughter, Debra’s mother, thought they lived with Bessie’s mother after Benedict died.  (Sarah was actually living with her daughter Emma, according to Sarah’s death certificate and Emily’s residence in 1930.) Bessie and Lowery did live in Pawnee County, Oklahoma,  just not in the same area.  They were in Liberty and she was in Burnhaw as was Emily.

Bessie and Lowery left Oklahoma in 1936; their destination was California.  My mother, Oma, says she remembers they were forced to leave because the land was barren, my grandfather and my grandmother’s brothers worked in the oil fields for a while, but Lowery decided to leave for California where they could find work.  (Oma was only 4 when they left. It would most likely be she was sharing parents conversation she had overheard.)
The paper trail puts Bessie and Lowery in Kern County, California in 1935. They  lived in Bakersfield, Kern County, California when they got there and worked in the cotton field. Charlie one of the twins caught pneumonia and died in 1938 and was buried in a potter’s field in an unmarked grave.
Apparently by 1940 Lowery had work as a WPA worker, as listed on the 1940 US Federal California Census.

Bessie lives until 24 October 1985 when she dies away at Turlock, Stanislaus, California.