When Walter P. Lane Vance was born on May 20, 1890, in Pine Mills, Texas, his father, George, was 37 and his mother, Susan Harper Vance, was 34.
The first picture we have of Walter is a family portrait when his father’s mother, Elizabeth Porter Vance, came to visit from Mississippi in about 1905. Walter looks like a clean cut kid. 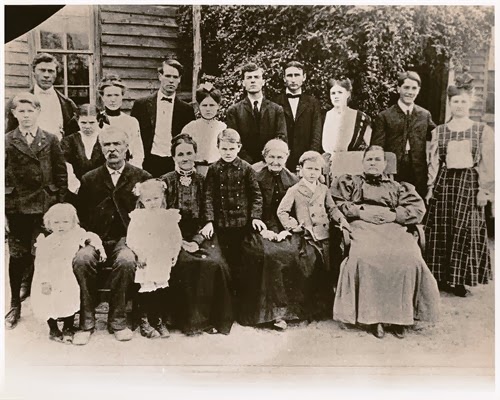 In 1910, Walter L. Vance was 19 years old and lived in Wood, Texas with his father, mother, 2 brothers, and sister.
1910 United States Federal Census:

The Texas Criminal Reports: Cases Argued and Adjudged in the Court of Criminal Appeals of the State of Texas ...1893-1963, Volume 63 By John Preston White
Page 431 Give us an indication of what the laws about liquor in Wood County was like.
...Pendergast, Judge, -- The appellant was indicted, tried and convicted of unlawfully selling intoxicating liquors in Wood County after prohibition had been properly carried, declared  in force, etc. on March 12, 1910.
Two things we know about Walter from this time period. One a picture tells all,

Also, he liked to party and go to clubs to dance. According to Mildred, his oldest daughter and the Hero’s mother, it was at a club that he met Mary Annie Reynolds.   They both liked the night life.
This apparently was the time period that Walter began to indulge in alcohol which destroyed his personal relationships and his health.
Walter and Mary Annie married on 8th of January 1911 in Wood, County, Texas
I found his residence and birthplace on the U.S., World War I Draft Registration Cards, 5 Jun 1917. Walter P. Lane Vance was living at a rural route in Hawkins, Wood County, Texas, when he registered for the World War I draft. He listed 3 children, a wife,  and that he was a farmer.  His description was that he was of medium height, medium build, with brown hair and light brown eyes. Mildred said his hair was dark auburn, and he had greenish brown eyes. The Hero had brown hair and greenish brown eyes.
In 1920, Walter Vance was 28 years old and lived in Camp, Texas with his wife, Annie, 3 sons, Thurman,Archie,Arnold, and daughter, Mildred, age 6mos. The indexer had enumerated him as Walter G.

When Mildred was 2, Walter and Annie were divorced.  Mildred was sent to her mother's parents to raise. Walter apparently left the area, because 2 years later in 1923 Water met Vivian Welch in the panhandle of Texas. He married her in Greer County, Oklahoma.

Vivian had a child by a previous marriage. This son was Kenneth Dial, but was enumerated in the 1930 census as Kenneth Vance. How I found this is another story.
In 1930, W.L. Vance was 39 years old and lived in Wilbarger, Texas with his wife, Vivan, son, and 3 daughters. Mildred’s grandparents went to live with a son, and gave Mildred back to her mother, who sent her to Walter to live for a while.  It was during this time Mildred developed respect and love for her father.  He was still farming, but drank heavily.  Mildred said he was hard on Kenneth. To her the worse part was when he would start drinking, although, I could tell she felt the drinking was because there was so much weight on his shoulders. On the other hand, she was frank that he was not a pleasant drunk.  She said when he was not drinking; he was a loving, caring man, who was not afraid of hard work.  He worried about supporting his large family, would come in from the fields looking tired and beat.
The April 1, 1940 US Federal Texas state census showed W.L. Vance was 49 years old was a WPA  worker and lived in Wichita, Texas with his wife, Vivian, and 3 daughters. Kenneth had left to join the Army. We also find that he only had a 7th grade education, and was renting.
It was not long after this that Vivian and Walter were divorced and Walter went to the oil fields in Kern County, California to work. It was while in Fresno, California that Walter died in his hotel room of complications of a compromised liver.
His son Dutch was in the service in California, and made the arrangements for the funeral  and burial in Bakersfield. [The search for the grave was written here... (click on here.)] Here I learned the degree that Walter had a penchant for nicknames.  I knew Archibald had been called Button, Arnold had been called Dutch, and here I found Walter called himself Bob for no purpose other than he liked it. Mildred laughed when I said "Mom, I would never have found him if it wasn't for his death certificate! Why did you put Bob on his tombstone?"  She smiled and replied, "Because that was what he liked to be called." Go figure.

He was remembered by his daughter with tenderness and love.
Posted by FranE at 7:56 AM