Tombstone Tuesday Or How A Death Certificate Helped Find The Grave

Walter Vance's tombstone had eluded me.
My mother-in-law said her father died in Fresno, and that she and her siblings had driven out to Fresno to bury him.  I had the California Death information from online so didn't consider purchasing a Death Certificate until I had called all the Fresno Mortuaries from the 1945 era without any results.  The Death Certificate became the focused way to find out who handled the burial.
Since I was not a blood descendant... granddaughter-in-law ..., and California Death Certificate applications require relationship, my daughter and I went on a genealogy trip to Fresno County Hall of Records. When we stepped inside the building it was like stepping back in time.  The decor is still 1930-1940's.

We, I say we because I brought all my genealogy information on Walter, filled out the application and handed it to the lady behind the desk.  She was surprised at the date. "1945?" she asked.  We nodded our heads and smiled.  Off she went and in less than 5 minutes she was back with the Death Certificate.

It had the Yost and Webb Mortuary as the embalmers. They are the oldest Funeral home in the area.  Investigating the document further,  it said "Removal" in the burial information.  Now what did that mean?
Since I was sitting outside the Fesno Zoo for the afternoon fun part of the trip for the toddlers, I called my daughter in Idaho (don't you love having a  network to assist) and got the phone number of the Funeral home from her.  A quick call, the miracle of computers, and an understanding member of the funeral home revealed they had removed his body  to Bakersfield.  There wasn't any notation as to which funeral home it was they had removed him too.
The next day I began my calls to Mortuary/Funeral Homes in Bakersfield.  The first one said to call the Greenlawn Mortuary in Bakersfield as they were one of the oldest funeral homes. A quick internet look revealed they had built their chapel in 1941. Perfect.  Another call.  The lady who answered was so sweet. She looked immediately and came back to the phone saying he is buried in the Slumberland lawn.  My heart was so full!  First try, and they knew exact space3, lot A and block 71 that he was buried in.
On Sunday we would go down and see if there was a stone still there.
Sunday arrived.  After church, we drove to Bakersfield.  The same Lady I talked with on the phone was at the desk. Bless her heart, she had everything there.  She gave me a copy of their index card. 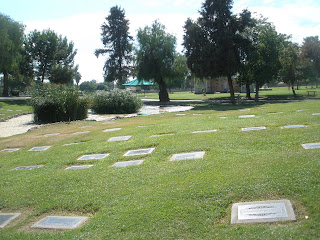 We followed the map and there was the grave on a quiet slope.

Looking at the picture of the children at the grave in 1945, it appears to be the same spot.
I will share with you in another post about the new parts of Walter's life we learned from the Death Certificate.
Posted by FranE at 5:15 PM