Sentimental Sunday The Hero as a New Father

I talked about the Hero being a Super Hero last week.  Well, his desire to protect the world carried over to his adult life. 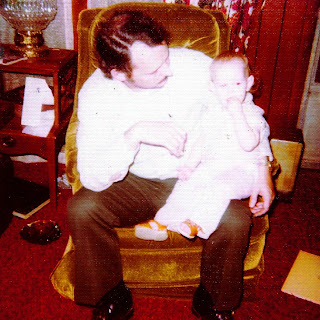 He said when our first child was born that his life changed in the instant he saw her.
I went to the hospital thinking I would go back home.  He went knowing we would come back with a baby.  He was distraught when they would not allow him back in the labor rooms.  Oh my it was the dark ages of Houston medicine.  He wrote a poem it will be a little later when I get it up.
I have told my story before (click here and it will take you there).
He was fond of telling everyone that He got to see our daughter and hold her first.  That she was the most beautiful child in the whole world.
He instantly became her protector.  'Grrrrr' said the dog to the approaching invader.  What are you doing on MY territory.  Yep, pretty much that was him.
We went to a restaurant when she was about a month old.  She being sensitive to noise (oh my was she) started screaming when the waiter dropped some dishes.  I was trying quiet her and eat because we were traveling and on a tight time schedule.  A kind lady came up offering to hold her while we ate.  You would have thought she had said, "Here let me TAKE her".  The hero grabbed her out of my arms and said "We are just fine", and off he went to the car with her in his protective arms, leaving me apologizing to the lady for his reaction.
There are other stories around this child and the hero, but that will be for another time.  Suffice it to say his connection was strong.
Posted by FranE at 8:18 AM

Email ThisBlogThis!Share to TwitterShare to FacebookShare to Pinterest
Labels: Life Changing Experience, Sentimental Sunday, The Hero as a New Father