Sentimental Sunday... The Hero and Our First Orange Bus Trip

We were on a trip to Louisiana for the company.  The meetings were over late.  We did not relish driving back to Houston late at night, but it was needful.
Off we started, I was in the shot gun seat reading to the Hero.  This was our usual method of traveling.  He drove and I read.  Reason, he was auditory and I was visual.  We were traveling down a two lane road.  It became slow because we came upon a couple of trucks. We had a CB going and he began listening to their chatter.  Finally, he became tired watching their lights and decided to pass.  As he pulled out, the trucks started parting on the road, he slowed down wondering what was going on. Luckily he did, because he saw two glowing eyes ahead. The truckers started whooping and hollering "Did you see that? Black as night and huge!"  The Hero joined in with "thought it was going to be hamburgers tonight".  They all joked back and forth for a little.  A herd of Angus cattle were strewn across the road. Somehow the truckers and the Hero had managed to wind through them and none were hit, a miracle with them traveling down the road at 55+ mph.   We were shaken, but grateful that we came through unscathed.  This was a memorable night for the Hero. A story he told several times. 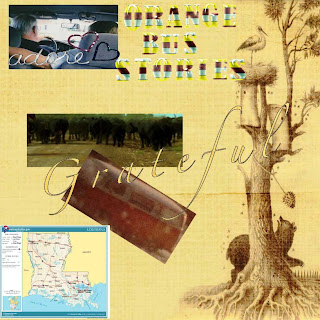 Lesson grandchildren... Pay attention when you are driving, you never know what may be ahead especially late at night when you can not see well.  If you feel you should slow down, listen and do so, it could save your life and others.
Posted by FranE at 3:18 AM