Sentimental Sunday... The Hero and an Orange Bus story finished. 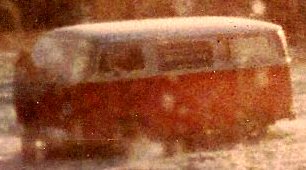 The rest of the story...
We started back to Texas from Vernal, UT.  The Hero was stressed because it had taken so long to get the bus running that he was 2 days late starting back.  His decision was to not stop.  That he would drive as far as he could then I would drive and vice versa.  I figured sure why not.
As we dropped down to moved off the mountain roads to Interstate 70 in Colorado,  the Hero advised me to lie down with the baby.  He would drive as long as he could.  This was not unusual, so I went to sleep with the baby.

I am not sure how long I slept, but I was a wakened by the sound of big trucks, and motorcycles, and flashing lights.  I sat up and saw what I heard flying by our VW bus.  I was overwhelmed. "What is happening? I feel like I am in a Start Trek movie at warp speed." I called to the Hero in the front.
He started laughing.  "We are in the Eisenhower Tunnel.  I am gearing down to keep from going too fast."
I felt like I had just entered panic mode.  (I will digress here and explain an old VW bus's brakes.  Not so hot.  We did not have power disc brakes.  This was a do it yourself-er. I tried to find an explanation on the internet, but failed.  Suffice it to say, our main holding brake system was the emergency brake.  Oh that is another story... shifting on a hill.)
I was now wide awake and shifted up to sit by the Hero in front.  Panic set in that our baby was in the back asleep on the bed and we were plummeting down this tunnel.  I could not see an opening ahead.  The 18 wheelers were petrifying me.  I was amazed at how in control the Hero was.  He concentrated on the keeping the speed within manageable range by downshifting.  He did not ride the brakes as I would have.  I do have to say, he had driven big Mack trucks for their cement company, so he was familiar with using gears.  On the other hand, he had not driven in the mountains in a truck.
Finally after what seemed forever, we came out of the tunnel.  The road evened out and I could breath.  Now I am thankful for the tunnel it makes travel easier, at that time I was not so sure.  I thought it was insanity.
When we arrived at Denver, the Hero was exhausted.  I was not well rested (no duh), so we found a rest stop to pull over at and slept for the rest of the night. 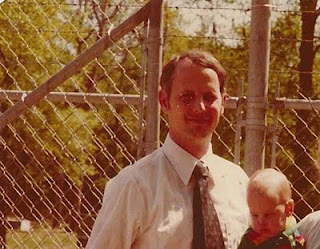