Sentimental Sunday ...The Hero and Fashion

Many of us have had the experience of arriving on a business trip and discovering we left one of our bags sitting on our desk, in the hall way, or in our car trunk not transferred to the other car.  Such was the dilemma the Hero found himself in when arriving in Louisiana on a business trip with the company's salesman.  He had left his bag in the trunk of his car. 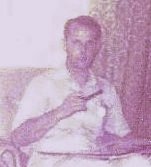 Fashion wise, I would say the Hero was pretty much traditional in clothing, with a tendency leaning toward wanting to be elegant like David Niven with a smoking jacket.  (He smoked pipes when we were first married).  I have to say I was not prepared for the fashion the Hero came home with from his trip.
He and the salesman had gone out shopping.  The salesman had talked him in to some very faddish duds.  (It said a lot for the salesman's abilities of salesmanship.)  Let me describe them to you. First there was platform shoes, then brown bell bottom slacks, with a bright yellow tie, and dark blue shirt..  The salesman had apparently convinced him he looked really in style so he would seem up with the times to those they called on.  I really am not sure what he was thinking of, but I can tell you he did not wear the platform shoes or bell bottom pants once he got home.
In all honesty, I don't think I remember what happened to those clothes. The experience taught a good lesson.  When leaving on a business trip, the Hero always checked twice before leaving to make sure he had the things he needed.