Who was the first in the family to begin searching for their ancestors? Why the Hero of course.

He followed the correct methods of starting instinctively. He first sat down and wrote what he knew, his birth and what were his parents and his grandparents names. Then he went to his grandmother and asked her questions about where, who, and what she knew about his grandfather. Next he visited with his mother and asked about her family. He quickly had his four generations sheet filled out. 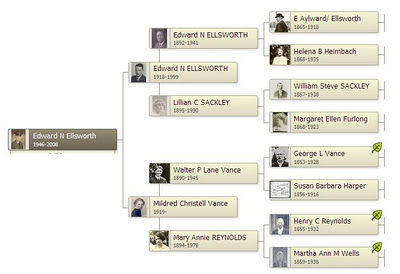 Next he began collecting stories and history behind his family. But life pressed in and he began to lose momentum. He told me all he knew and quit actively researching himself, but when I would say I had need of his help, he would assist me. He continued to visit his grandmother and take our daughters so they would know her. When she died, he was distressed because his father decided he didn't need to attend the funeral, but to stay and watch over the company while the rest of the family attended. It wasn't surprising when he said he needed to visit and view his grandparents and great grandparents graves in East Texas.
He had a great love and testimony of family. In fact, that was one reason I was chosen by him. He wanted a large family and wanted someone that believed in family too. I still work on his family for him and our children.  It is a need.
Posted by FranE at 11:39 PM