Sentimental Sunday The Hero Went to His 20th HS Reunion

In 1984, the Hero decided we needed to go to his High School Class's 20th Reunion.  He had graduated from  Westbury High School in Houston, Texas. His class was one of the first to attend, as it was opened in 1961.  He loved his High School and there are many stories to be told from this time period.  He kept in touch with most of his friends, and lamented the loss of some who died in the Vietnam War. 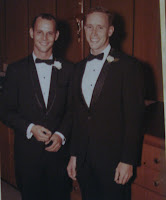 When we arrived, his twin brother and his wife were already there.  We worked our way over to sit near them. It was an interesting crowd.  They were from diverse walks of life and some well traveled.  I enjoyed listening to them renewing acquaintances. Then a (hmmm, what do I call her) young blond woman came and threw her arms around the Hero and said "You made me cry."  Needless to say, it was a bit startling.  He looked at her puzzled and said, "I did? Sorry, I don't want to be rude, but I can't remember your name."  She laughed and said, "It is okay, I'm ... I was a year behind you and had a terrible crush on you.  (someone's name) and I decided to crash the party and see our old friends."  He smiled. At that time, the Hero's brother came back to the table and positioned himself in between them, and said "Hi, I don't remember you." and steered the conversation away from the Hero.  As soon as she left, he turned to the Hero and said "I can't believe she was making a play for you in front of your wife!"
Later the Hero and I laughed that his brother had been observing from a far and felt the need to come and protect his brother from a "huzzy".  (Their words not mine, I was staying out of it...a bit overwhelmed.)
It made the Hero feel good on both accounts.  He found out that a girl had a secret crush on him and had cried because he didn't notice.  He wouldn't have done it on purpose.  However, the male ego loved the boost.
Also, it made him feel good that his brother cared enough to come and "protect" him, even though he was the oldest.
For years after that, if I wanted to tease him, I would look at him with big eyes and say "You made me cry."  He would look at me and a slow smile would cross his face. He would wink and say,  "I love you."
I miss that smile.
Posted by FranE at 11:46 PM