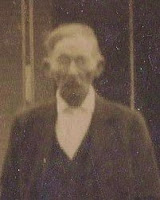 I am grateful to these men for very different reasons. The man on the left is the brother of Henry Crawford Reynolds (on the right), who is my mother-in-law's grandfather. Archibald Spencer Reynolds was difficult for me to find when searching for Henry's family because he was first listed by his mother as Spencer on a census. Later I understood why, that was his grandfather's name. The rest of his life he was known as Archibald. He became a Reverend and loved being a minister of the gospel. He married twice, live in Alabama, Florida, and Texas. He loved his family. Now, why do I write these things, because one of his great granddaughters emailed me to say she thought that her great grandfather was the Spencer I was looking for. How did she know that? She had a autobiography that he had written and given to his son. What a wonderful gift! It gave me all the information that confirmed the family I had been leaning towards and answered many questions I had.
My own husband had a year before we knew he had cancer started on his personal history. I would say, "you have plenty of time why the hurry". He would say, "I feel I must get it done." Now that he is gone, I am grateful he took the time. Sharing feelings, information, and life experiences with others in the family by way of writing is a gift of great love and eternal worth.
Back to Henry. Henry chose first to be a farmer, then felt the call to be a doctor and went to school to become a doctor. He was not a well known doctor. He lived in Wharton, Texas and was a "country doctor" . His pay many times was a chicken, vegetables, etc. He too loved his family, was married to his life long sweetheart, and raised his granddaughter, my now 90 year old mother-in-law. How do I know these things? Not from him, I can't even find his medical records. It was my mother-in-law who loved him and her grandmother so very much. It was not hard to get her to talk about them. When Martha (the grandmother) first saw Henry, he had just ridden up on his horse to her grandfather's house looking for work. She was hiding behind a bush at the fence "looking". She said of him "He was as pretty as a picture". I am grateful to him for being an honorable and sincere man who tried to help others and taught the same to his granddaughter. I hope that I have learned from both men and will be able to offer history, love, truth, and service through my family research.
Posted by FranE at 2:12 AM