When the hero was about five, he loved being a cowboy.  I have told you about his imaginary friend.  When he was in character, he was the character.  Maybe I could say, he was a character. ; )

That being told I will take you into a day in the life of the five year old Hero. 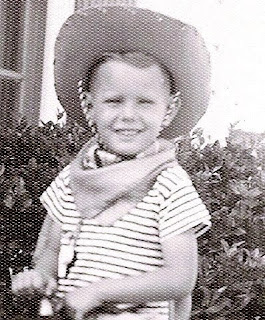 His roll as a cowboy required a set of cap guns, and a hat.  He would run through the house 'shooting things up'.
This particular incident involved his older sister.
His sister who was six years older, took piano lessons weekly.  The teacher lived on the next block. She took everything very seriously.  After her lesson, she would come in and tell her mom how it went.  This day, she came in crying, saying that the teacher didn't like how she had  played.  The Hero was in the other room listening.  There was only one thing to do....
Setting his shoulders, he donned his gun set, put on his hat, and sauntered out the door over to the piano teacher's house.  Making a firm fist, he knocked on the door and waited with his hands at the ready over his 'guns'.  When the teacher came to the door, she looked down in surprise at the little Hero standing in such a resolute stance at her door.   He looked at her with a stern eye, drew he guns and said, "I'm two gun pete and I'll shoot you dead if you make my sister cry again."   With that he turned and stalked off.
Needless to say there was a phone call to the mother, accompanied by peals of laughter, which his mom still giggles at as she tells the story today. 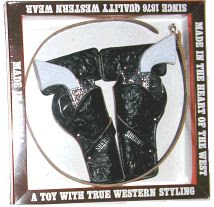 I did a search on the internet and was excited to find at a antique site a set of the Two Gun Pete pistols.


The thought for you, my grandchildren, is love your family enough to stand up for them .
Posted by FranE at 9:46 AM

Email ThisBlogThis!Share to TwitterShare to FacebookShare to Pinterest
Labels: Pistol Pete, Sentimenal Sunday, Stand up for those you love.