Slice of Life Affects of Documents

As TexasBlu said in her introduction of the topic at Slice of Life  (click here to see her blog) for this week, documents can play such a roll in so many facets of our lives.  For this blog, I will stick to documents for primary proofs in genealogical research.
Before we get started, I will remind the readers that if you click on the image it will be larger, I have them small for space.
I have to tell you that there is one site right now that I can not say enough good about and praise the volunteers that are making it possible to for easy access of documents of primary proofs such as marriage licenses, birth, and death certificates.
Drum Roll...are you ready...FamilySearch Record Search... [if you click on FamilySearch it will take you to the site. ]

Why am I so excited about an old dog?  Well this dog has added some new tricks.  I have a family I have talked about before.  The Heimbach Family.  I knew from family resources that Helena Heimbach married Edward Ellsworth, but I didn't have the document proof.  Here it is from Records search. 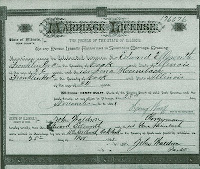 I had all of her brothers and sisters from a Nebraska census in 1880, but after that they all seemed to disappear except for Helena and her youngest brother Frank.
In comes Records search new data...a marriage license for a younger sister in Nebraska. You notice it has her parents and his parents names listed also I apologize I cut John F Riley's name off at the top...concrete association. 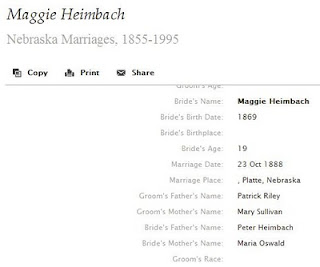 A search for her with her husband.  This census has the majority of her younger brothers and a sister all together in Oklahoma with the father as boarders at her home...The Heimbach name was so slaughtered that it had never been picked up in searches...(I corrected the indexed name in Ancestory.com)...

Another search put them in Arizona.  A death certificate for a younger brother who died childless, 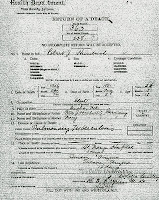 but the sister and her husband and oldest brother, who I had thought mustt have been dead are on the census in Arizona at that time.  A daughter of the oldest brother is with him in the census. I find he had been in Colorado.  Still looking for him there.

Another search.  A death record for the daughter is found in Texas. 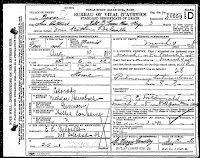 and a marriage record in Arizona.  That is why I went to the historical cemetery in San Antonio, Texas to find her grave.
It is wonderful that there is organized documentation of vital activities in our lives which aids us in matching generations past.
Posted by FranE at 5:56 PM