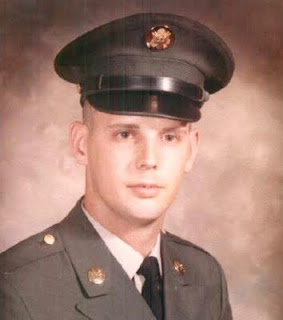 The Hero was proud of having served as a medic in the 4005th Army Medical Corp. He never missed any of his Reserve meetings and loved serving, missed us; but loved serving during the summer.  A favorite story of the family about the Hero was when I was delivering our 4th child.  It was a long labor, and I was really tired.  My doctor, Robert Campbell,  had served in Viet Nam War as a medic and then finished his medical degree while in the army.  There they were "coaching" me (yeah right), I was drifting in and out with labor pains, and they were swapping medic stories.  I would reach up and pat his hand and say...'Hey, a little help here.'  They would laugh say a few encouraging words, then go back to their stories.  (I still laugh about it.) You have to love them.
His father and grandfathers before him could not serve because of health reasons.
When we were studying his mom's ancestors, he was excited to find in the 1840's two of his ancestors fought and died in the Mexican War.  During the Civil War, his great great grandfather fought for the South.  He unfortunately caught typhoid and died in 1864.
He was fascinated with the whys of war and the dynamics of war.  I have told you when we went to the Genealogy Libraries together, he would find a book to study the how and why things happened.  I am just learning that side of genealogy.
When the National Anthem would start, he would be one of the first on his feet with a salute.  When the Pledge of Allegiance was said, he would sound out loud and clear with his  hand over his heart. He was a patriot. He believed in his country and all it stood for.  If he had been asked to, he would have fought for it.
Grandchildren, your granddadE upheld our country and your ancestors fought battles for our country to leave you a better place to live in.  Don't take it lightly.
Posted by FranE at 8:09 PM