Sentimental Sunday... The Hero Got a Hair Cut...

The 18th was the 35th anniversary of our Temple Sealing.  We traveled in an old volkswagen bus from Houston to Mesa, AZ to have the sealing performed in the LDS Mesa Temple.  Have I said we were broke before. Well it was true.  We had saved up for the trip and there wasn't a lot of spare money. 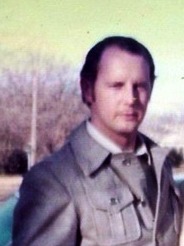 When we arrived the day before, we camped at a KOA camp ground.  The Hero decided to save money by me cutting his hair, because it was a little long.  It shouldn't be a problem, just a few clips.  Did I tell you the wind was blowing?  It was.  He sat on a lawn chair and I stood behind, took a deep breath and commenced to start trimming. Unfortunately when I pulled up a piece in the back the wind when whoosh and I went whack at the wrong place.  Uh oh... He says "what?"  gulp... "maybe you need to run by a barber shop while I watch Texasblu."  A little concerned now, but still cool.  "Okay, be back in a little while."
Texasblu and Little Miss Sunshine and I all played and read together until he returned.  I must say I was a bit apprehensive.  I was wondering if he would come back bald.  About an hour later, we heard the VW drive up.  I peeked out. Whew, he had hair, and , lo and behold, a big grin on his face.
After a hug, he laughingly told me about his barber shop visit.  As the barber was putting the protective apron on him, the barber asked "Who's been chewing on your hair?"  The Hero laughed and told him what had happened, with a bit of excuse thrown in about the wind for my benefit.  The barber laughed and said I thought so, you would be surprised how many hair cuts we have to "fix".
It all turned out well, the hair cut was short but not bald, and it gave the Hero a fun story to tell our future boys about his "chewed" hair cut. (Glad I could be of service.)  Nice to have a man with a sense of humor.