Sentimental Sunday... The Hero One Example of His Compassionate Side

I have so many stories to tell you of his compassionate side. Tonight I will share with you one of the sweetest things I think he ever did. 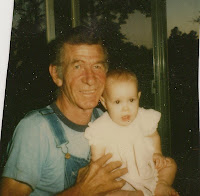 My father went through a terrible time when he had a major heart attack.  He had a personality change that took him from a loving father figure to the Hero to a terrorizing father-in-law who one time got out a shot gun and threatened the Hero with it. We understood that heart attacks can cause awful personality changes.  It did not make it any easier to live with. I tell you this so you will realize how special his action was.

Near the end of my father's life, he spent close to 6 weeks in the hospital with drugs that kept him bed fast. We would stop by at night on our way from work to see him and check on how my mom was too.  One night, when we arrived my dad kept trying to convey to us something, finally the Hero figured out it was that he had soiled himself.  We rang the bell, and no one came.  The Hero proceeded to clean my father like a baby. He was so gentle and careful to not embarrass him at all. My eyes still tear up at the scene,  because I know how hurt the Hero had been by my father, for him to be so loving.  It must have reached my father too, because the night before he died, he called home and asked for the Hero to come the next day. Little did we know.
Posted by FranE at 8:30 AM