Sentimental Sunday The Hero Was Concerned About His County Early

At an early age, the Hero was drawn to politics and righting the wrongs of the world.  At Jr High age, he listened to the news.  One night he heard someone talking about communism in the world and its dangers.  He was distraught his history teacher had not spoken of this.  The second night of listening, he heard about a film that he could get that was for informing the community about the dangers of communism.  He was fired up.
He began by asking his history teacher if he could have an after school meeting that it would be about current events regarding communism.  The answer was yes as long as there was a supervisor there.  He called the number he had gotten from the radio, and arranged for someone to come to the school the day scheduled and show the film.  He made up a letter explaining about the film and asking for permission for the students to come to it, and sent it out to their parents.  The responses came back positive, and the stage was set.
Unfortunately for him, someone, I don't know if he ever knew who it was, called the principal's office and complained and asked for it to be stopped.  It must have been someone of influence, because they had him cancel the film showing and suspended him a couple of days for organizing it.  He was dumbfounded and could not understand why his parents would not stand up for him. (When he told me about this, he was still perplexed as to why when there had been notes of consent, and there had been full disclosure that this happened. )   He did not remember who he had been listening to but even at adulthood, he said the message had made a mark on his understanding of the danger to his beloved United States of America.
I have searched for what film it could have been and have decided that the film was probably from the John Birch Society or Young American's For Freedom, which was started in Houston.  Which ever, the Hero was conservative and never deviated in his belief that there was a fight against evil for this country.  He wanted his children to have freedom, and the ability to choose.  That was a decision made when he was in Jr High.  I never even thought about it in Jr High.  He was a man of deep convictions. 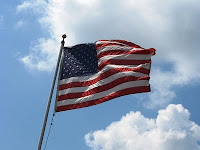