Sentimental Sunday A Walk in Oklahoma

My aunt Della Langley Whitaker was a jewel.  When she was young, she always had on a hat.  She considered herself the trend setter for her younger siblings.  Interestingly enough, she never came to the family holiday dinners.  Of course her children were just a bit younger than my father.  I remember we would go to visit her, and later we lived in the same town.  I would walk over to her house after school and stay with her until my father got off work. 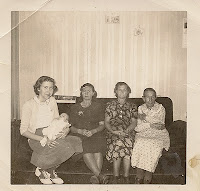 with Della's daughter in law and new granddaughter.
My dad grew up playing with her sons and all his life he was very close to them.  Things I remember most about her was her Indian fried bread. If we came at any time of the day, she had her bowl of flour and would cook some bread with hot cocoa in the winter, iced tea in the summer.  She was ready to offer some of her special comfort food to the visitor.

She was very family oriented, and would write letters to me while I was in college.  She knew all her grandchildren's birthdates, and would worry if she hadn't heard from someone in a while.  She never drove, my uncle always took her to where she wanted to go, then her sons took her after their dad's death. It was always fun to go and visit her and hear stories of her youth.  Although even she did not have the correct name of her dad's mother's maiden name.  I looked for years for the wrong last name until another relative found my grandmother's marriage license and the correct name was on it. There are some things like solitare, and Indian fried bread that just bring a warm fuzzy feeling to mind of open arms.