Sentimental Sunday The Hero and the Long Walk Home

The kids would tell you that the Hero was prone to late nights at the office.  I used to think have mercy can't he get it done in the eight hours of work.  After he died, I spent 6 months helping the company finish out the old books and start the new bookkeeping system.  I began to appreciate his comment that it was easier to accomplish the book work after everyone left in the evening.
This story centers around the fact that the Hero would start working when his dad would go home in the evenings because of interruptions. Invariably, he would call at 7 pm and say "I am on my way home."  It was an hour and 15 minute drive from the office to the house.  At 10 pm, after some fretting and worry, I would call, knowing that he was going to say, "I was trying to finish one more thing and it took longer than I thought it would.  Sorry, I forgot the time."  Shame on him.  Well, it came to pass, that one night I had waited, called at 10 pm, he said,  "I am on my way."    At midnight, I threw my hands up in disgust and went to bed.  Two areas to note:  I was tired, so I fell soundly asleep.  It was before cell phones were widely in use.
At 4 am, I was awaken by the hero flopping on the bed.
Here is his story. 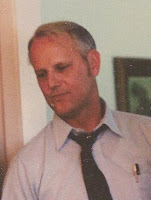 "Why didn't you come check on me?  I have been walking since 11:30 to get home.  I broke down about 7 miles from town and thought I would walk to call you....do you know that there are a LOT of dogs on country roads? I never saw them, but I could hear them breathing, and barking.  I was afraid to try and go up to any of the houses ( now this was back in the 1980's and the number of houses on the highway you could count on one hand).  I finally made it to town.  (A big Sigh) The 7 Eleven Store was closed, and the pay phone was broken.  I thought about stopping at Stan's but I was afraid to wake them up.  Do you know it is freezing outside.  I am so cold.  Anyway, I kept on walking and just got home.  I am so tired."
Well, after my initial reaction, which was, if you had come when you said you would I would have been looking for you and would have gone out to search for you....oh wait...you never take the same route twice...(that is another story). Then I remembered he was right, the weather man had said it was going to be in the 20's that night.  (cold for Texas...cold for the Hero...it would get to 70 and he was reaching for a sweater...lol)
I reached over and hugged him and snuggled him to warm him up.  BUT warned him...if he had been true to his word, he would not have suffered so.  He agreed and changed his ways, for about a week... ; ) 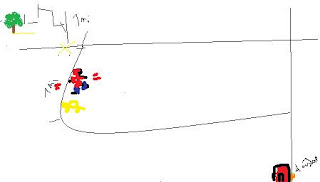 The long walk...The red building is Houston office.to..FM 2854, the car broke down 7 miles from State hwy 105 then another 6 miles home.  The roads are not straight nor are they flat.
The moral my grandchildren is always do what you say your are going to do.
Yesterday was The Hero's birthday.
Posted by FranE at 1:28 AM

Email ThisBlogThis!Share to TwitterShare to FacebookShare to Pinterest
Labels: Remember to Call, Sentimental Sunday, The Hero and The Long Walk Home