Sometimes We Need a Different Perspective

As we were facing a possible flu pandemic last year, it never occurred to me to look into the 1918 Spanish Flu pandemic as a possible cause of family deaths. 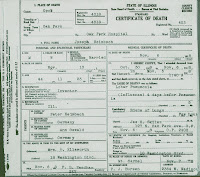 The other night, I was doing my usual probing in the newest records on FamilySearchlabs.org  when I came across one of the sons of  our Heimbach family.  Joseph Frederick Heimbach had died in Chicago in Nov 1918.  His diagnosis was Lobar Pneumonia. Influenza was put in parentheses as a secondary cause.
(A reminder you can click on the images to make them larger)

Just prior to that in June, Joseph's brother-in-law, Edward Ellsworth, (our ancestor) had died of Myocarditis secondary to Hypostatic pneumonia. 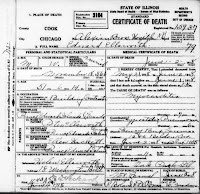 According to Librarian Ann Maggio of Chicago,  "The virus made its first appearance in March of 1918 when, in Fort Funston, Kansas, over 200 soldiers complained of flu symptoms and nearly 50 died from the disease.
Health officials hardly took notice at the time, and the U.S. had other things on its mind: fighting World War I
the virus popped up in other pockets around the country that spring, it seemed to disappear as quickly as it came.According to newspaper reports from the period, for the week ending September 28, 598 new cases of Spanish Influenza were reported in Chicago and 176 deaths."

...the flu was 'officially declared an epidemic in Illinois in October of 1918'.
This particular article reappears quite often in the East St. Louis Journal during the fall of 1918.

As a matter of fact it wasn't until October of 1918 that it is even mentioned in the Chicago Times. 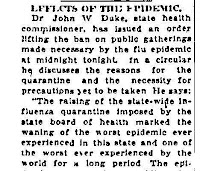 This is an excerpt from Jan 1919 Chicago Times:

The majority of the news during Spring of 1918 until October 1918 was focused on WWI.  Even with the large death tolls, the only focus it received was to say for prominent people, funerals were not public.  It was sad to note that many did not even have a funeral because of the epidemic.

I  feel the Helena Heimbach Ellsworth must have been a very sad lady to have dealt with the death of,  first her husband, then her brother within a 5 month period.  She must have been a strong person.  Her daughter in law, remembered the time because she was in the hospital having her son, our ancestor, at the time Edward died.  She was worried about her baby's health.

I think both men were victims of the flu.  Edward seems to be one of the popped up and disappeared pockets.

Other than giving an accounting of the huge number of fatalities as a result of this virus, there has been little information documented, with the exception of the military where it appears to have started, and epidemiology statistics.
Posted by FranE at 2:51 AM