Sentimental Sunday The Hero and Zeb the Zebra 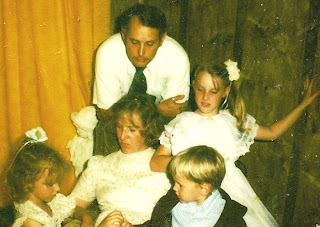 When our children were small, the hero loved to tell make up tales for them.  His favorite pass time was playing with them with hand puppets.  He could spin a tale then.  One of his favorites was Zeb the Zebra, I do not have a photo of him, but here is my drawing. 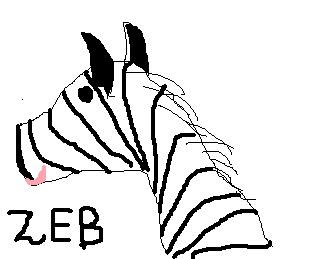 Zeb was a crocheted hand puppet.  The Hero took on a new personality of total mischief maker when he would don the puppet.  The children would howl with laughter as they forgot who was making him talk.
Their favorite activity as we drove to visit family, which was always at least a two hour drive, was to have Zeb entertain.  I would drive, and the Hero would play.

The time we took a long trip from Texas to Oklahoma was probably the most fun.  The Hero must have been bored, because he out did himself.  He had me drive in the "fast lane" so he would be next to the other car lane.  He had Zeb revved up.  When a car was approaching, Zeb would jump up and down going ooh ooh!...then he would talk to the other car's passengers and discuss things with the Hero.  I worried, because the other car's passengers, and the driver were looking back at us after passing...Oh my...Our children would howl at the antics and the children in the other car would be looking out the back window wanting more.   Zeb was a sure cure for riding doldrums.
It was a sad day when poor Zeb was put to rest after much wear and tear covering the roads. The Hero looked high and low for another Zeb, but to his dismay, was never able to replace him.
Posted by FranE at 1:21 AM

Email ThisBlogThis!Share to TwitterShare to FacebookShare to Pinterest
Labels: Entertaining children, Sentimental Sunday, The Hero and Zeb the Zebra