Sharing a Slice of Life Prompt 2 A Hero Story

Texasblu prompted us to write about a hero that has in some way touched your life.
I write weekly about the man who was and is my greatest hero.  He brought so much to my life you all will be hearing stories forever.  LOL
I will address someone else that touched my life and my entire family's lives for this post.
It is a post on religious beliefs, as that is the core of our family.

Most of us have something that occurs that changes the the course of our lives.  For my family it was an act of courage and love of ones' fellow man that set the course for what our family would be.

The Hero was agnostic when he was a young man.  He had all sorts of excuses why God might not be.
He dated those that did not believe in God and he associated with those that blatantly taught the opposite of God's teachings. 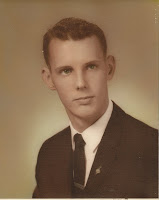 It was after one of these dates that he walked into the Student center at the University of Houston in Houston.  When he walked in, he saw from words written on the blackboard that the prior meeting must have been a bible study group.  He started making fun of the scriptures written on the blackboard to impress the young lady he was with.  One young lady who was leaving the prior meeting spoke up.  [He decided that she had to study the scriptures because she surely wouldn't be able to get a date.  (bad attitude)]  She had the courage to face his ridicule and challenge him with "Don't you believe in God?"  He flippantly said, "I don't know, He might be or He might not be. He has never talked to me."  She responded with, "If I gave you a book, would you read it?"  He said sure, took the book, noted that it was called The Book of Mormon and walked off.
Years later he would say, when I asked if we could consider a church to raise our children in so they would learn of Christ, "one church I would like to look in to is the Mormon Church."  He had read the first pages and decided it had merit.
If that young lady had not had the courage to speak up, the family I have today might not have been.  She is my unnamed hero.  Christ is an important part of our lives and the Hero would attribute his finding faith in Christ to an unknown young lady he could never say thank you to. 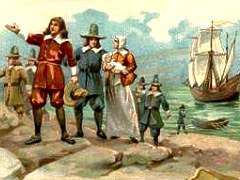 My thankfulness for missionaries goes all the way back to the Mayflower Days when my ancestor William Bradford listened to the missionaries and he sought a better way to worship God.
There are millions of missionaries in almost every faith or religion you can think of that shares their faith with someone and brings about a life changing experience for them.  I am thankful for those who have the courage to say would you like to know about something that could change your life....These are my gentle Heroes.
Posted by FranE at 1:22 AM