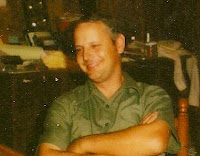 When we met someone new, the Hero would almost always tell the following story...He loved it.  This is in his words as best I can remember.
"When we first moved to Montgomery, we really lived out in the middle of no where.  To keep up with our friends, we would have a monthly get together.  The most memorable one was at our house.  Frances was hurrying to prepare her part of the pot luck meal.  She needed some mushrooms for a gravy.  As I said, we were out in the middle of no where, it was 30 minutes to a real grocery store.  We discussed it and decided that our daughter had studied mushroom at school, so Frances could look at her pictures and go to the back of the land and get some of the edible ones.  Frances was a bit leary, but was game to try since she was in a hurry.  After she made the gravy, she decided to give Jake my Red Bone Hound a bite.  If he didn't get sick, it would be okay.  Well, he seemed to be doing fine, so when the company got there, she served the gravy with her dish.  Everyone enjoyed it, and we all sat down to visit, when Stan came in late and said 'I hate to tell you all, but Jake is dead.'  Frances went into a tizzy.  She called our friend Dr. Pontani and told him about the mushrooms, he came to the house and pumped our stomachs.  As we all were sprawled out on the couch and floor moaning, Stan said, 'I knew it was going to be a bad day, when I saw Jake get hit by that car'..."
The hero would just die laughing at that point, and most people recognized it as a joke.  Most people, then there were those who looked at me like don't you know to not use mushrooms from the forest.  I would give him the look...but that never stopped him.  He had a joke he could remember the punch line on and he was going to tell it.  LOL... I can still remember his mischievous smile as he started the story.
It's a good one, don't you think so too?
Posted by FranE at 12:11 AM