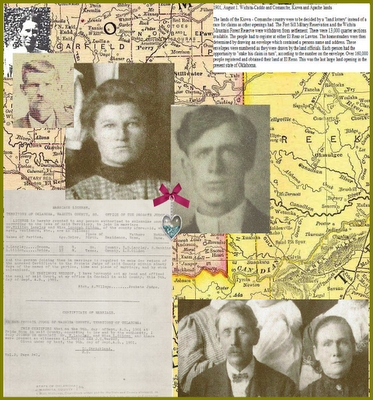 I saw Linda's post at Flipside and decided I would try my hand at Scrapbooking some of my family pictures.  I wasn't aware I was going to discover new information about my grandparents.  I always knew they were married in Oklahoma Territory.  I had heard that my grandmother's father Levi Gildon in the upper left hand corner had participated in the Oklahoma Land Lottery.  I have not been able to get hold of the records to confirm that he did win a piece of land.  My findings included that up until at least June of 1901 Levi and his family lived in Freestone County, Texas.  I thought they had come earlier.  The land lottery was in Aug 6 1901 in Kiowa Lands of Oklahoma Territory.  Benedict Langley in the lower right hand corner already lived in Cloud Chief, Washita Count, Oklahoma in the 1900 census.  My grandparents were married on September 9, 1901 at her parents house in Washita County.  It appears that Levi came up to Oklahoma from Texas for the Land Lottery and his daughter fell in love and married an older man, my grandfather, he was 7 years older.  She was only 16 when they married.
Thank you, Jasia over at Creative Gene for the challenge, I would not have caught this if I had not been trying to be correct in my presentation.

Whether I made the carnival or not it has been worth it!  Awesome night!
Posted by FranE at 2:50 AM