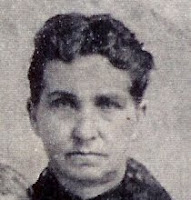 I have had a couple of family names that confused me at first glance.  The first of such was my great grandmother Katherine Roberts Humphries Roberts.  The family thought that she was a Humphries at first, but after research, it was revealed that she had married a Humphries when she was young, did not have any children, and after his death, married my great grandfather George Washington Roberts.  Her maiden name was Roberts.  This gave way to speculation, were they related? 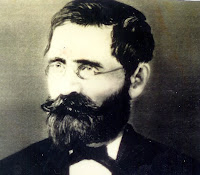 The census revealed that George was a veteran of the Union in the Civil war and had settled in Kansas with his land bounty from his service.  He was born in Jackson Co., Michigan, a descendant of Capt. Lemuel Roberts of Connecticut/Vermont who wrote his Revolutionary War Memoirs. (Michigan people I have decided I may need some help with Jackson County I am running into challenges with probate records)

Katherine on the other hand was born in Lawrence Co. Kentucky, her Roberts go back to the Roberts who came in the early 1700's to Virginia.

Connecticut, Virginia...nope doesn't look like a cross.
Below is my grandmother's ancestry line back 5 generations. 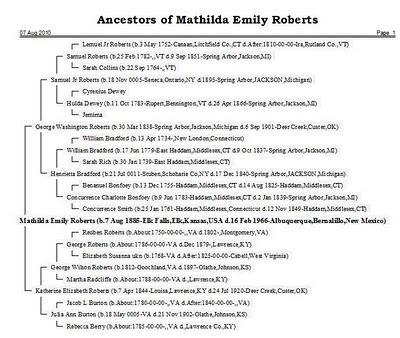 Click on the picture to view it larger.
Posted by FranE at 1:37 PM