Sentimental Sunday The Hero and The Train Transformer. 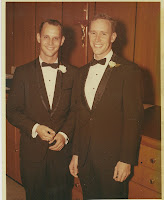 The Hero was always experimenting, especially in his teen years.  He was also quite mischievous.  He had a twin brother. According to him, they were usually fighting 75% of the time.  When I finish this story, you will understand some of it.  ; )
The motivation behind this story was simply to see if he could do it.
The Hero carefully searched the garage for his old electric train set.  They had not used it for years, so his mom had stored it in the garage.  He had just finished reading in his Everyday Science book uses of transformers.  His thoughts were "Can I do it?  Can I get away with it?"
Methodically, he set up a table near the door of the garage, placed the transformer on it,  looked for and found some old electric wire.  He took the wire, and hooked it to the transformer, then attached the other end of the wire to the door handle with enough wire to allow the door to open and close.  Next step, he looked for and found some leather gloves. Plugging in the transformer, he was ready.  He stuffed the gloves in his pocket after closing the door carefully, and went off to find Dick.  He was sure that Dick would want to see what he had invented.
A bit later, they arrived at the garage.  The Hero had his gloves on and quickly opened and closed the door behind him.  Then Hero sneaked around to see what would happen.
Dick was perturbed that the door had been closed in his face and grabbed the handle to open it.  Well....after the initial shock and dance, Dick let go of the door handle.  The sight of his brother dancing and yelping sent the Hero into a fit of laughter.  (The transformer was not strong enough to harm anyone, just sting them...this according to the Hero's dad.)  When Dick saw what had happened, oh my, the chase was on; and because the Hero was laughing so hard...Dick won. I can only imagine the aftermath. can't you?  ; )
Girls, you might want to wait a few years before sharing this with you sons.
Posted by FranE at 1:36 AM

Email ThisBlogThis!Share to TwitterShare to FacebookShare to Pinterest
Labels: Sentimental Sunday the Hero and The Train Transformer