Sentimental Sunday The Hero and The Obeisant Goose

We have had a variety of animals and fowls on our small farm.  There was an unusual gander, that stands out from the rest.
The Hero, as you have seen, had silvery white hair from the time he was about 40.  He went through all the teasing about being prematurely old for his age.  This is the background for our goose story.
We bought some goslings one Easter and raised them to wander around the farm freely.  They were pretty and would pull weeds from the yard.  Never bothered any of us, until the second year. 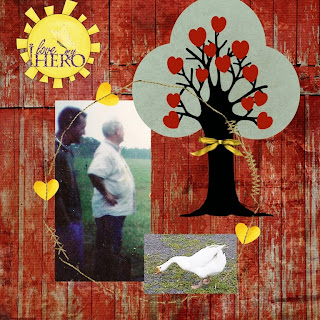 That spring, the gander apparently decided that the Hero was The Great White Goose.  At least, that is what we all came to the conclusion it was.  The Hero would go outside, and quickly the gander was by his side, bowing, and sometimes even rubbing against his leg like a cat.  I guess, you could say "how bizarre."
The goose was given to my sister-in-law when he decided to herd the small grandchildren.  We never figured out what the goose's fascination with the Hero was.  It did give the family something to tease the Hero about...and he had a few laughs over it himself.
Posted by FranE at 1:26 AM

Email ThisBlogThis!Share to TwitterShare to FacebookShare to Pinterest
Labels: Sentimental Sunday The Hero and The Obeisant Goose