Sentimental Sunday The Hero Was Jilted 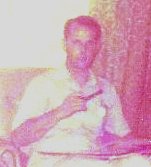 Before I met the Hero, he had married a girl he had met where his mom worked.  She was sweet, impulsive and not very thoughtful.  They were married about 3 months,when she had a back injury from a car accident she had been in.  She could not work, which meant the Hero had to quit school to work and care for her.  The end result of these series of events was the Hero received his draft notice.  Given his wife's state of affairs, he went to the local army reserve and requested a position in the Army Medical Reserves (a long list of stories resulted from this).  His place of employment at the time was St Luke's Hospital as an inhalation therapist working with Dr. Michael DeBakey's heart unit team.  The Reserve Unit was elated to have him come on their team, and sent his papers in just ahead of the draft papers.  [This was to his benefit as well as mine later]  As you know, a new recruit must go to boot camp for 6 months.  The Hero had only been married for 6 months, so this was very hard for him and leaving his wife who was in the bed most of the time for back pain.
He had been at boot camp for 9 weeks, when his wife was allowed to come for a visit.  He was elated and excited.  He said he was walking on air for a couple of days. A week  later he received a letter from a lawyer in Houston telling him she had filed for a divorce.  He plummeted  into depression.  It was a shock, no forewarning, no apparent reason.  He wanted to go back home, but didn't have leave nor a car.  His Sargent took pity on him and not only gave him a pass, but gave his best friend who had a car a pass to drive him so he could find out what happened.  The trip proved unfruitful.  She would not see him, nor would she talk to him.  A mutual friend intimated she had been having an affair while he was gone.  He was overwhelmed with "why" questions, and no readily apparent answers.  It was about a month later I was to meet him (click here for that post) when he had come back again to see if he could figure out what had happened. It was not meant to be. The chasm had grown wider and the door was closed. He was a sad person.
He later stated that he figured there must be a law that you must have your heart broken at least once to help you really appreciate when you find the right person.
Posted by FranE at 12:18 AM

Email ThisBlogThis!Share to TwitterShare to FacebookShare to Pinterest
Labels: Sentimental Sunday, The Hero Was Jilted