The Hero was always a supporter of his school mates.  His Junior High School did not have a pep squad. He wanted to show support so he formed a pep squad of his own.  He always had to do it tongue in cheek, so they were called the Fleas.  Do not ask me why.  It was just so.  Apparently they had a lot of fun the one year, but that was all.  He said they wore the huge glasses as their trade mark, I know what he was talking about they were a gag pair of sun glasses that would have fit a giant.  Can not believe I could not find one picture of them, but then I am not good at search terms.  I give you the alternative...
This is the Hero at that age: 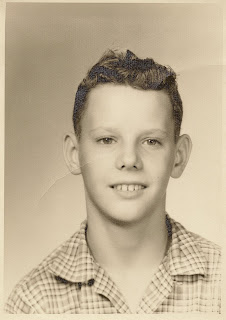 This is his grandson, a wee bit younger, volunteered to model how he would have looked. 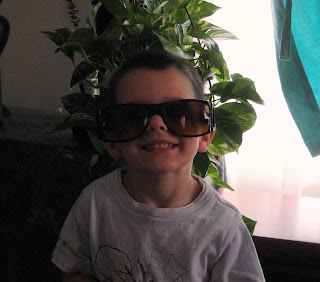 Can you imagine a group of boys showing up at the football game in the over-sized sunglasses yelling "go team! Fight team!"  I would have had a hard time suppressing a giggle.  He had quite an imagination.
Posted by FranE at 1:32 AM