Interesting How Life Plays Out 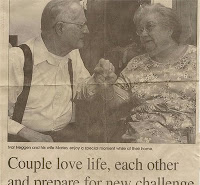 When I was little, there was often strife between my dad and my mom's twin sister. Aunt Marley, by her own admission, is a strong personality. She and my mom were teachers. My mom an elementary reading teacher and Marley a typing teacher in High School. They were both dedicated and very busy. When my children were little, it was her husband Ivar that they had most interaction with. He loved kids and took time to spend with them. The teachers lacked this time because of school activities. He was a character and always had a story to tell. It was not surprising when he took up acting at a local community theater. He was good at it. When Aunt Marley retired, he encouraged her to join him. Their talent grew so much that the Houston Chronicle covered their performance. This article was just before their 50th anniversary. I was never able to see their performances, but the public praise was great. When he died, we all mourned. The family dinner after the funeral was held at the community theater that he loved.
A few years ago, my mom was stricken with early dementia. At first, I began to understand what my father had felt when he dealt with Aunt Marley long ago. [She is a tiger, my mom had said in school she would start a fight and Marley would end it. How true.] She did not believe that my mom could be a victim of dementia in her 70's. After a week of trial care keeping, she decided that we were right and mom would have to have special help. That was 4 years ago. She and I have become friends. We discovered many similarities in our personalities, and sometimes talk for lengthy periods. When I was growing up, I never would have dreamed we would have been friends, but the stage of life can be much more intriguing than a play.