Sentimental Sunday... The Hero and Politics 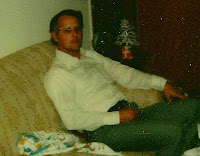 There have been rumblings about late nite, back room plannings in the political world to day.  This brought a Hero story to mind.
The Hero had a hard time believing what he read in the newspapers or magazines.  There was a reason for this. When he was in his 30's, he was moonlighting doing flooring applications for kitchens, etc after work to make more money for our growing family.  Sometimes it meant he would work in the wee hours of the morning so he could be at his day job on time.
One such job was at a restaurant in Montrose area of Houston.  He came home upset.  I asked him what was the problem.  Had they not paid him, did the job go wrong?  "No," he said, "the job was just fine.  It was what I saw happen this morning that upset me."  I waited while he went in and cleaned up, then came back into the room.  Yes.  What happened?  He said he was finishing up, it was 3am, and in comes the 3 top reporters for the ---- newspapers.  That was strange since they were competitors, but in a few minutes, some people from the newsrooms of the local TV stations came in and sat down with them.  (right here I will say I forgot to say this was a 24hour restaurant.)   The Hero said there wasn't anyone but the staff and himself around so they didn't keep their voices down as they talked.  Then in came another reporter, (he told me who, but I don't remember).  This person threw a folder down in the center of the table and said "Here's tomorrow's headlines".  They all reached out and began looking through the file.  After a little discussion, they mapped out the campaign for presenting the news the coming day.  The Hero was upset to see that what was presented to the public as breaking news had been planned in the early morning hours by a few men.
He would never accept on face value any articles again.  He had to research the information and persons out himself in many different places, before making a decision about politics or financial discussions.  Because of earlier experiences in his life, he would evaluate each political person by their merit, history, and people they associated with. I will share with you next week about his college experiences during the 60's.  He was accused by friend, foe, and family alike of being a conspiracy theorist.  He didn't let that bother him, he knew what he had seen.
In truth it is the best way to make decisions. I am glad we had that nudge in the right direction.
Posted by FranE at 6:00 AM 3 comments:

Email ThisBlogThis!Share to TwitterShare to FacebookShare to Pinterest
Labels: back room dealings., Sentimental Sunday, The Hero and Politics

While helping the Hero's mother and sister,  I was surprised to find the Hero's imaginary friend had impacted his family greatly.  When helping his sister, the first Hero story she remembered was his imaginary friend Danny who lived at the Shamrock Hotel.  This was the same for his mother.  They both said his imaginary playmate was a regular visitor at their house and it stood out because the Shamrock was consistently the home of Danny.  Mom was particularly puzzled because, the Hero was a twin.  She had never thought that one might have an imaginary friend when they were together all the time. Jean was puzzled because she couldn't imagine where he got the idea of the Shamrock because they didn't go there. 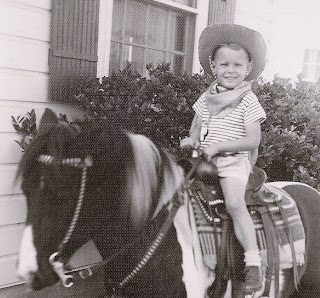 They both said he would go about the house talking with his friend and planning what they would do.  When asked about who he was doing this with, he would say Danny.  They would ask where is Danny staying, we haven't seen him on the block?  He would say, "He lives at the Shamrock.  He keeps his horse there."  They would laugh and he would happily go off galloping on his imaginary horse with his friend.  He must have been about 4 or 5 years old from their accounts.  What in imagination the Hero had at an early age!  Danny was a regular visitor for some time, they didn't remember when his play stopped, but the story of imaginary friend Danny was strong in their memories.
He was a great story teller for his children when they were small.  They would be sick and he would sit down an make up a story for them. It would always have action and a happy ending. When we were on trips, he could come up with a story to entertain them with while he drove.  Their mom got a book.
Here is a link to the story about The Hero and his imaginary friend as told by him.
Posted by FranE at 9:51 AM 2 comments:

Email ThisBlogThis!Share to TwitterShare to FacebookShare to Pinterest
Labels: Sentimental Sunday, The Hero and his imaginary friend

When the Hero was about 2, his mother said his twin
was diagnosed with Rickets Disease.  At the time the treatment for a child was cod liver oil.  In her mind, if it was good for one, then the other would do well with it too, so, they both got cod liver oil daily.
Must have worked because neither had bone challenges as they grew.
Wonder what his memories of the taste of cod liver oil was?  We never used it, maybe that's why.?
I know our first daughter won't touch anything that has to do with a fish...just wondering...do you think that would be passed on in the genes?  Interesting thought.  Glad it wasn't me, I only had cod liver oil once because my cousins and I ate half a red wagon full of raw corn.  Not as pleasant memory.  Don't think my aunt meant it to be.  Ah life is full of memories. 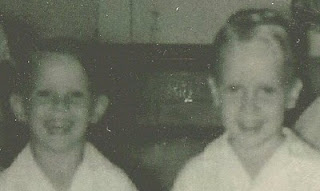 Sentimental Sunday The Hero Through His Mother's Eyes

I was visiting with the Hero's mother while she was in Rehabilitation Hospital.  We were discussing how hard it was for her to get up to do the exercises.  She expressed her feeling that she is 91 and feels the heaviness of being closer to the end of her life.  This led to the discussion of how the Hero had handled his last days with grace and forbearance.

Her next comment surprised me.  She said he was always strong and bore pain well.  She went on to explain that when he was about 3, his sister had slammed the car door shut on his finger.  She could remember how he just stood, looking in surprise at the door and that his finger was still there.

They went to the doctor to have it looked at and stitched.  He obediently gave his hand to the doctor to look at, and quietly watched as the doctor stitched his finger.  His mom was impressed.
She ended by saying "I hope I can bear my last days as well as he did."
Given the knowledge that she has COPD, I pray that her last days will not be unbearable too.
Posted by FranE at 6:57 PM 5 comments: