Always drink upstream from the herd. -  Will Rogers
You can probably tell where this story is going.  The Hero went hiking with his son and son-in-law in Utah.  They were excited, since they were from Texas where there are not many chances for mountain climbs.
His description of the hike up the trails was exquisite, rocky trails, small wildlife, tall trees and a mountain stream, fresh sweet mountain air.

He wanted to go slow and just take in the sights, however, the boys were young vigorous and kept moving along at a good pace.  It was hot and the Hero had not brought along a canteen.  They came to an opening in the woods where there was a place to sit on a rock and enjoy the lovely stream as it flowed on down the mountain.  It looked so inviting.  He said. "Guys, why don't we get a sip of the water here?  The water is clear and it is flowing over rocks."  The boys said "Dad, lets go on a bit further before we take a break."  He was hot, but he wasn't going to be a wimp with the boys, so higher they went.  I do not remember exactly how much further they went, maybe one of the boys will come on and elaborate, but it must not have been that much further, as it made a big impression on the Hero.  They came to another wide spot in the trail by the stream and it was muddy, smelly, and elk hoof prints all over.  He said it had the appearance of being a spot that the elk came to drink and do other bodily functions at.  He was so glad he had not sipped from the stream down below.  You should have seen the grins of the boys as they chimed in telling the story. So, you see, there is wisdom in Will Roger's quote.
Posted by FranE at 10:36 PM 1 comment:

This last week I was exploring the FamilySearch Learning Center area to see what was new. 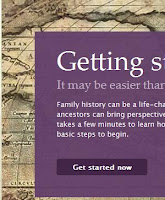 I randomly choose a video to check it out.  It turned out to be Tom Kemp teaching.  (now I can't zero back on it.)  In the middle of the video he was talking about using Facebook as a research tool.  I listened as he talked about finding a family group on Facebook, on which he found pictures and information.  I considered this and decided it was time to set up our Langley Family -- Descendants of William Langley and Nancy Carrier group on Facebook to find those branches that have not yet been found.
I contacted a distant cousin and told him what I was up to. He thought it was a great idea and supported the idea.  I set it up and added pictures, links to blog posts, then invited some cousins and told Brian to invite his family. It was set up as an open group and once I had it formatted and set up I told the members it was their page to share, search, and grab pictures.
I was wonderful to see it went from 2 to 41 members in two days.  Most are 3 and 4th generation that I am just now meeting. It is so fun to see the meet and greet and explanations going on in the chat. 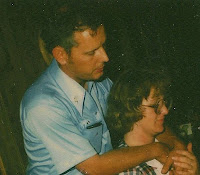 Now, I know you are thinking what does that have to do with the Hero.  About 1998, I was beginning to realize the importance of have proofs on information I had in our family history we were gathering.  I asked if we could go to Pawnee, Oklahoma and see if we could find my great grandmother's grave, and if we could maybe go to the court house.  He said maybe; he would have to see if he could take a couple of days off during the week.  It was approved, so we began our journey. We first went to my Aunt Lynn's to found out where the grave site was.  She mentioned she had heard from my cousin Janice in Kansas.  My heart went zing, I had not seen Janice since my one of my other aunts had died in 1973. I looked longingly at the Hero and said... could we call her and maybe see her?  That slow smile came over his face and he said sure, what is the number.  We called and it just so happened that she was off and so was her husband could we wait?  They could be down in an hour.  When they arrived, we began sharing what had happened in the last 27 years. (Yes, that is way too long) After about and hour, there was an 'ahem' , I looked at the Hero and he said we need to go to the court house if we are going to make it on time.  He looked at my cousin and her husband and said, 'Do you all want to come too?'  Yes.  We all piled into the car went to the court house, they actually had the death certificate for my gr gr grandmother Sarah Jane Hankins Langley.  We got two copies one for me and one for Janice.  We saw that the funeral home listed was just across the street, so we went there.  They gave us the burial plot and a map.  We then when out to the graveyard and found the grave site.  The Hero managed to help us, connect with each other, obtain a death certificate and grave site information as well as a visit to the grave yard all in 3 hours in one day. With the Hero's help this was the beginning of a special bond my cousin and I still share today.  We both remember that day well.  Many of those reconnecting on Facebook are nieces, siblings, and nephews of Janice.  I love the Hero so much for taking time out of his busy work life to help me find my family living and dead.  He was a family man.
Posted by FranE at 8:23 PM 2 comments:

I was browsing today and was excited to see that the tickers are getting very close to the final count down for the 1940 Census Records release.  Will we all be on the internet either on twitter, G+, Facebook, or blogging counting down together on April 2 ( 5 - 4 - 3 - 2 - 1 - ! )?  I check the website frequently to remind me how close the date is.  You can follow with me. See the links below.
The desire is to have people from the state they live in or the state(s) they are researching in do the indexing for that area. This should increase accuracy... and maybe even some serendipitous moments of finding a family member.   The questions have been posed as to how are they going to get the proper state to us.  I am still waiting for that answer. 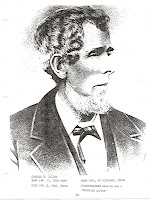 I have volunteered to index for Texas. My gr gr gr grandfather came to Texas in 1842.  Yes, I plan to apply for First Texas First Family Certificate, so far not enough time for that lineage paper. I have covered a fair amount of the state for my family and the Hero's family as well as my son-in-law's family.  I digress, but the point is I am ready for Texas.  Bring it on!
Have you volunteered to index.  You are not being asked to index it all by yourself just to do what you can, every sheet counts.  I have been so blessed by the many  records helping me find my family online that I am excited to give back.

At this website 1940 Census, you can see all the organizations teaming together to make this happen 1940 Census Project .  If you are a regular or old FamilySearch indexer you might want to check this website, 1940 Federal Census  This is a how to do it if you don't have an index. Stephen's One Step to the 1940 Federal Census.  We are armed and ready.
What ever site you would want to sign up on, I would encourage you to join us in the count down, today it is 45 days and moving down...  In the words of that great Price Is Right, "Come on down!"
Posted by FranE at 4:44 PM 1 comment: 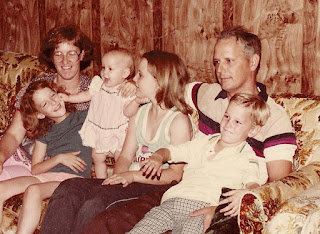 The Hero and I had ups and downs financially.  When Valentine's Day came around, we usually made it a special day for our 6 children, leaving little for us.  We developed the tradition of going to the card section after collecting what we were getting for the children, and scouring the cards for what we felt expressed our feelings. Then we would each show the other what we would have bought for them.  It was a special feeling, and sometimes we found some funnies too.  What I loved the best was when he would write a poem for me or one of the children.  He was a special dad and husband, we send him our love on Valentines Day...a sweetheart to never be forgotten.
Posted by FranE at 12:00 AM 2 comments:

Sentimental Sunday The Hero Was Proud of His Eagle Scout

Today is Scout Sunday.  As I listened to the men and boys speak of the positive aspects of scouting, I remembered the young years when the Hero served as a Scout leader. He loved the ideals that Scouting taught the young men.  He went on camp outs, to scout camp, always concerned the boys would have a good experience.   Later when he was sick he served as the person who taught and signed off on the Merit Badge for Citizenship for the Community and Citizenship for the Nation.
Our first son was the victim of a poor scout leader and an ignorant mom, so he got close but did not get to finish to his Eagle Scout. The Hero was sad for him. 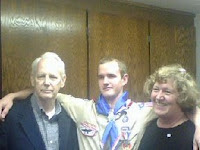 Our second son was privileged to have many wonderful scout leaders and a supportive mom and dad (we learned our lesson).  He earned his Eagle Scout.  If you would like to read the account of the award click here  , it was special for both.
The Hero was excited that our son made it and that he was able to be there to see him receive the award.
My son now encourages his nephews to do scouting because of the principles taught.
Posted by FranE at 6:26 PM No comments: