Until I found my 2nd great grandmother's obituary, I did not have any clue as to her birth date or her death date or what her character was. Today, I revisited my ancestor's birth dates on FamilySearch while filling out the questions to ask your grandmother sheet for my grandchildren. I identified that two of my daughters were born on my dad's two sisters birth dates. I was curious as to who else might have been born on another relative's birth date.  Several were really close like my 4th daughter was 2 days away from my dad. My oldest son was 4 days away from mine and 3 from my mom's sister. My youngest son was born on my Mom's birthday. One of my children was born in December. I have not found an ancestor born in December, marriages, just no births. I do have to say that there are many we don't have full birth dates on.
Back to my reason for this story... My birthday is the same as Nancy's. I hope my longevity is as great as hers and more, but mostly I hope there will be nice things said about me like they said about her.  A life goals.
This was a Mother's Day endeavor to practice what I preach and write down my personal information for my grandchildren.
How about you. Have you written down things for your family. Maybe you don't have children, but you have memories you can share about family that nieces and nephews, cousins would love to know.
FamilySearch Blog has some ideas to help.

The Hero Had GERD

Talking with his mom, you would never know that the Hero had an obedient bone in his body, but I witnessed him being called, in a manner of fashion, obedient by his doctor.
In his mid fifties the Hero was diagnosed with GERD (GERD, is short for gastroesophageal reflux disease; a condition in which acidic gastric fluid flows backward into the esophagus, resulting in heartburn. It had become painful and caused him sleep loss so we had gone into the doctor to find a solution. The doctor said the best treatment was weight loss and raising the head of our bed to a 45 degree angle. The Hero was cautioned to not use a foam wedge that was available on the market. The effect of that would be to cut him off in the middle and make the GERD worse. We will not talk about the weight loss.
We went home and the Hero began problem solving. There weren't any wooden support extensions back then and our bed was a huge wooden backboard bed that had a memory foam mattress that he had paid 2500 dollars for, so he wasn't giving that up. Hmmm, said he, if I put blocks up under the edges I think I can raise the bed up to the 45 degree angle. He bought concrete cinder blocks, and began his process of measuring the angle and adding smaller bricks to achieve his angle. He did it. Our massive bed was like this... 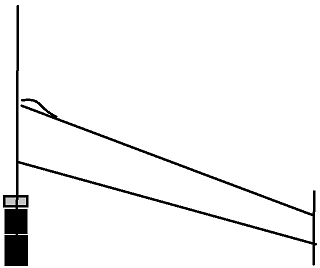 It was exactly what the doctor had described. The only problem was you would have to occasionally crawl back up to the top at night when you slid down the slope. 😄😄 I love that man, he made life such an adventure. 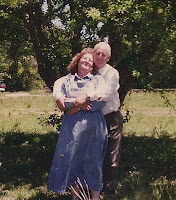 When we went back to see the doctor on the follow up visit and the Hero told him what he had done. The doctor was amazed. He said no one had ever actually done that. (I am sitting here laughing at the doctor's face and the Hero's face who was amazed that no one had ever done what the doctor said... duh) We continued to sleep like that for a few years until the Hero was diagnosed with cancer and it became impossible for him to get into the bed like that.
Today there is actually a huge wedge that goes between the mattress and the box springs to elevate the whole top of the mattress and not bend the body at the waist like the "pillow" wedges do.
Well, when you go to bed tonight in your comfortable bed, think of the Hummer who would use her elbows to inch up in bed to the top quietly so as to not wake her Hero up. Life can be funny.
Posted by FranE at 9:41 AM No comments: