A Town Without a Library is like a Body Without a Brain.


I love Libraries. They are my number one resource when looking for what is available in a small town.  I always stop and visit when driving in an unknown area to me to see what they have.  I had the following experience when visiting the Fremont County Library in Landers, Wyoming.  I arrived with only 30 minutes to research in their genealogy department. They had a wonderful Wyoming collection.  Because of a small staff, they were unable to be with me, the books are locked in cases to protect the collection.  They would have to come pull a book, leave me in the room.  I would then have to go get them, and do the process over again.  It has to be an awful challenge to them, leaving what they are doing and helping in another area.  They were nice, and tried as best they could to be helpful.  It was evident time was not on my side, I told them what I was trying to accomplish regarding my great grandfather.  They immediately said you need to visit the new museum.  They called on the phone and found that it would be open another hour, so they gave me the directions. Their help ended up with my finding out where the burial records were sent for my great grandfather.
A Town without a Library is like a body without a brain.
Now you know why I back the Support Your Local Library... Read on.

FIND A LIBRARY NEAR YOU

Thank you to StateStats.org
for providing this infographic and other free web guides and tools. 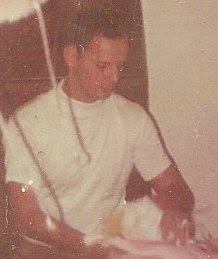 When we were first married, the Hero wanted to be like his brother-in-law and hunt. His father had never gone hunting to his knowledge.  The Hero was wanting to put duck on the table... I mean meat on the table.  He asked Tim if he could go with him the next time the guys went out.  A date was set, and the Hero's dad gave him a his old shot gun.  He sat and cleaned it several times making sure it was in perfect condition.
The day finally came.  The Hero dressed in a jacket and jeans.  It was a cold morning for coastal Texas.  He drove over and met 'the guys' to go out to the duck blind.  They had a cooler of beer.  He was hoping for hot chocolate.   Their first order of business was to set him up on one side of the pond and they went to the other, with the words 'wait for the duck to land'.
He sat there, lying on the ground, vigilantly looking at the sky and the pond where a decoy had been placed near some reeds.  It was quite a while before he finally heard a quacking sound.  He strained his eyes.  A duck was nearing the pond. It slowed and began to land on the water.  The Hero was excited. The duck was in front of him! He took aim, shot, and missed because he was shaking.  He shot a couple of more times, but the duck got away.
The other fellows came over in a foul mood.  "Why were you shooting?  That was the lead duck, a scout. You should have waited until the flock began to settle in.  Now they won't be back.  Might as well go on home."
He came back home 3 hours later, cold and unhappy.  "Why didn't they stay with me or instruct me.  Tim should have known, I didn't know anything about duck hunting."
It wasn't the best experience, and the Hero never got to go hunting duck again.
Later, he raised ducks for the freezer on the farm.  He said it was a much better experience.


Today, I was having some fun on Pinterest.  It is a place I save things I want to go back to later. I have repinned some provident living things that I knew would be helpful for making sure I would not be found wanting.  In doing so, I began to see a trend of people posting things to help themselves against disasters.  I did not see any one posting things that would be serving others, thus I have started a board called "Ask Not What Your Country Can Do For You".  I decided to start sharing and keeping places that people help each other.  Here, I will emphasize Genealogy service.  I can not share one of my favorite sources twitter, because it is too wide a river of information. There are many who share helpful genealogy information all the time. I give a big shout out to all my gen friends on Twitter.  I will share some Genealogy helps I have come across.
Facebook has a new version of RAOGK  They also have many genealogy research communities and research groups.  If you are interested in helps for Genealogy Societies, and tips on research, We Tree  is an example of genealogy service.  There are several technological helpers in the blogging genealogy community 4YourFamilyStory ,  Modern Software Experience , and geneabloggers.com are examples.  If you just Google 'genealogy societies bulletin', or something similar, you will find a wealth of genealogy societies that have websites and information on what they have to share.  I only shared a very small example of awesome bloggers of genealogy helps.
I am glad I am in the genealogy world. I love the way they help us learn, and research. It is uplifting to watch how they encourage each other to continue their research. Other areas of society would do well to watch and learn from them on how to build people up.
If you are interested in helping this link is about volunteering.  Check with  your local genealogy library they can use volunteers too, as their budgets may have been cut reducing their staff.
Posted by FranE at 1:30 AM 1 comment:

Sentimental Sunday: The Hero's Dream at 16.

Most young men dream of cars, big jobs, et cetera, I guess the Hero did too, however going through his book of writings, I found a poem of his wish for his future.  I am far from home so I can not share the poem.  Will do that when I return home.  I have put off writing his stories now for too long.  A bit of writer's block as well as over whelming challenges in life.  Back to my story
The Hero simply wished to dance with his beautiful daughters at their wedding.  He said that many times later as our daughters grew.  I am happy to say this wish the Hero realized two times... It would have happened four but two daughters didn't have dancing at their wedding receptions.
Here are pictures of the two daughters and the Hero.

I am thankful he was able to enjoy these time with his daughters, it made sweet memories for both of them. He was a dreamer.
Posted by FranE at 2:23 AM 1 comment: