I keep seeing people putting up posts and notices of New.FamilySearch.org being shut down.  I am surprised anyone is still going there.  It was a church only website and we as consultants have been teaching and showing for over a year where the FamilySearch Family Tree is found and how to use it. (albeit that they are constantly "updating" it).
When the Church of Jesus Christ of Latter Day Saints decided that the family tree should be open to all member and non member alike... after all it isn't "my" tree it is "our" tree, they developed the software for what is now known as Family Tree on FamilySearch.org that is open to anyone who will register. [let me put a plug in here.  If you are using Family Tree or are planning to to, please put in contact information.  The tree is meant to be collaborative and to allow people to contact and work with each other. Now you know why they ask you to register.]
I have not been to the New.FamilySearch site for over a year.  No reason to... Family Tree is so much more and has so much more potential for working with others especially those that are not LDS.
This is the announcement on New.FamilySearch.org
"On February 1, all public APIs (application programming interfaces) will be turned off, as will be the ability to access the program. This step is necessary as we enter the final phase, which is to transfer and synchronize all of the remaining data from new.FamilySearch.org to FamilySearch Family Tree. It is anticipated that this final phase of data testing, transfer, and retesting will require a year to complete. Once this phase is completed in early 2016, new.FamilySearch.org will be completely shut down."
You notice the phrase " transfer and synchronize all of the remaining data from new.FamilySearch.org to FamilySearch Family Tree"... that means nothing will be lost, nothing is forgotten, it is all moved to be allowed to use and correct if need be while working with each other.
I am still working with FamilySearch and assist in teach about, promoting and working in the FamilyTree.  I have at times a love/hate relationship with my tree, but realize that the best I can do is better than a "do over", it is methodically going from front to "the end" applying the Genealogical Proof Standard to fix and beautify.

Proof Argument for Sarah Sackley Marrying a Flanagan
The Problem
There was a Sarah Flanagan tombstone in the Sackley Family plot at the Calvary Cemetery in Evanston, Cook County, Illinois.  The Family lived in Chicago from 1849 to present day.   No one of the present day family knew who she was.

Background
Sarah Flanagan was not on the Chicago Death index.  The assumption was she lived and died in Chicago, since she was buried there.

Findings
The 1870 and 1880 Federal Censuses of Illinois revealed John and Margret Dyer (from family records) Sackley had a daughter Sarah born in 1867 in Illinois. [1] [2]


A marriage of a Sarah Sackley to a Michael J Graham was listed in the Chicago Herald 12 Oct 1890.[4]


The 1900 Federal Census of Illinois showed Michael Graham enumerated with a Sarah in Chicago, Cook, Illinois along with 4 children[6]

The 1900 Federal Census in Cook County, Illinois showed a Michael J Flanagan enumerated with an Annie and 4 children.
Michael J Graham’s death was found in the Cook County Deaths, 1878 – 1922.[8]

The marriage of Michael J Flanagan and Sarah Graham was 14 Aug 1907 in the St. Peter's Catholic Church, of Chicago, Illinois.[9]


The 1910 Federal Census of Toledo, Lucas County, Ohio, revealed a Michael J Flanagan was enumerated there along with a Sarah from Illinois and 10 children.  The ages of the children were close making it puzzling, but the census said she had 10 children and 10 were living, which is how many were enumerated with them.  The age of 18 was given for Michael at age of marriage.  Sarah did not have an age listed.[10]


Summary:
The two marriage records proved Sarah Sackley married first Michael J Graham in 1890 and second Michael J Flanagan in 1907.
The death record of Sarah Flanagan gave father as John Sackley and mother’s maiden name as Dyer and revealed the remains were removed to Chicago.  These were Sarah’s parents and the proof of being buried in the cemetery in Chicago.
The death information and burial are consistent with the initial known facts.  The children found with Michael J Flanagan and Sarah on the 1910 Federal Census would have been a combination of his and her children.
Conclusion
The Gravestone in the Sackley family burial plot for Sarah Flanagan was that of  Sarah Sackley daughter of John Sackley and wife of Michael J Flanagan
Attachments Marriage and Death Certificates. 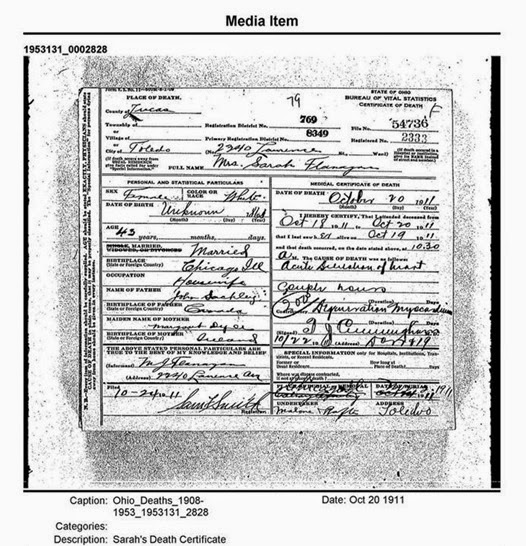 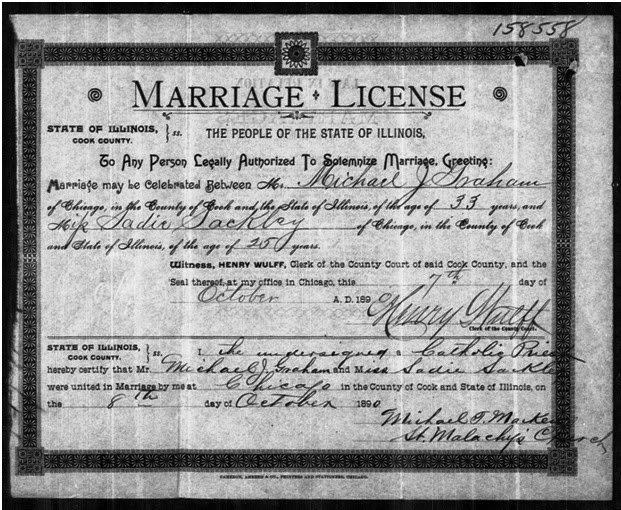 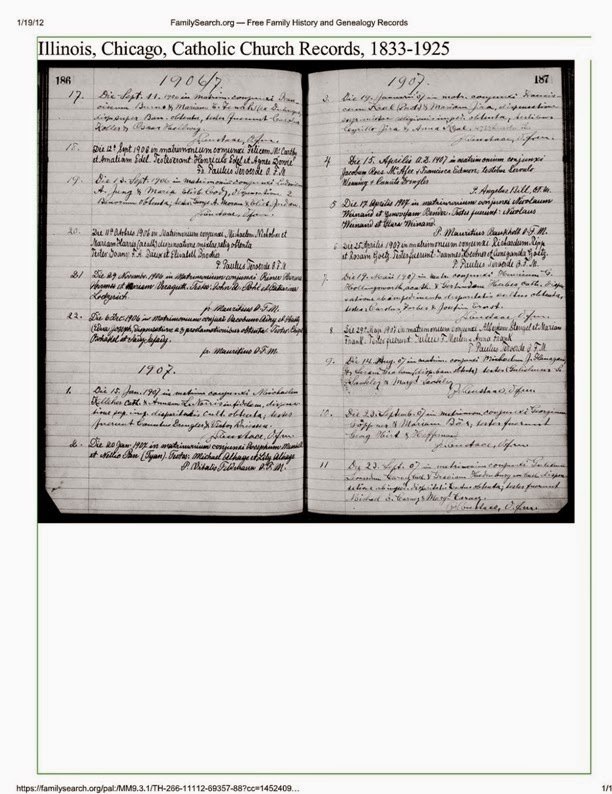 The purpose is to get geneabloggers to remember to accentuate the positive.  I think most genealogy researchers are perfectionists.  They rarely step back to take stock of the positive that has happened in their year of research.  There, of course, is more to do, however, little pieces of the puzzle begin to bring the picture into focus.
These are questions Jill gave us to ponder and answer with positive thoughts.
1.  An elusive ancestor I found was... David F Burleson.  He was not my direct line, however, David Franklin was listed in many different trees as two men with different wives.  The War of 1812 Pension Files on Fold3 were the source of the break through.  The files showed David Franklin Burleson, who was the son of David and Ursula Burleson, had two wives and it gave the death, that everyone had estimated, of his first wife and the place.  It was a great finding.  One that will change many trees.2.  A precious family photo I found was... a photo of some type of mill with my gr great grandfather and his son in Oklahoma about 1915... 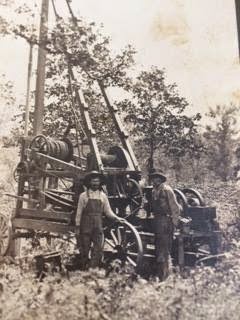 3.  An ancestor's grave I found was... because of a wonderful person who was just collecting pictures and tombstone of anyone with the same surname, "just in case"... Proved date,and place of death of a civil war ancestor as his Civil War file was not complete. 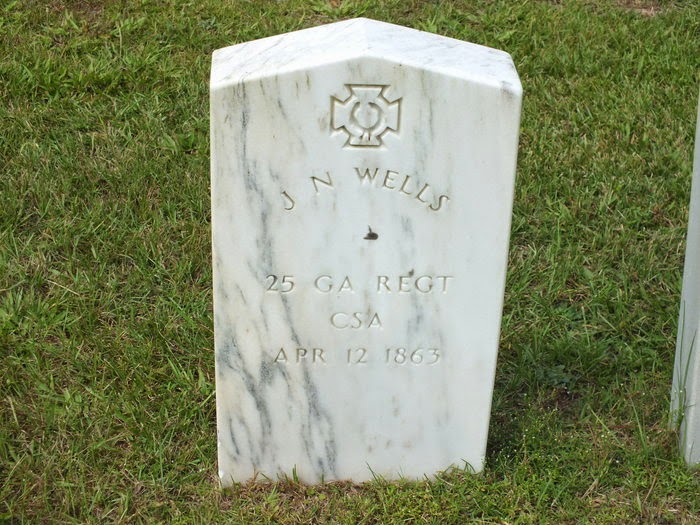 4.  An important vital record I found was... was the death certificate for the above ancestor.5.  A newly found family member shared... a picture and caused a second look at a different picture. Controversy still not resolved.6.  A geneasurprise I received was... DNA matches that points to a confirmation to prior preponderance of evidence without paper trail. 7.   My 2014 blog post that I was particularly proud of was one of the few 52 Ancestors weeks challenge posts... It was about my grandfather's sister Bessie Langley Bowen. I am so glad I started this and even happier that Amy Crow's 52 Ancestor's meme is continuing it this year. 8.   My 2014 blog post that received a large number of hits or comments was Totally Floored and Appreciative   Not so much because of content, but because of  fellow blogger interaction.  Do you seek comments? 9.  A new piece of software I mastered was Android apps for my tablet and phone for Ancestry.com10. A social media tool I enjoyed using for genealogy was Facebook.  I have a couple of family groups on FB and they have been active in sharing family information as well as pictures and stories.  Love the stories.11. A genealogy conference/seminar/webinar from which I learnt something new was FGS 2014 in San Antonio.  My heart is saddened that I will not be able to make it to FGS 2015 in Salt Lake City... Would have been too cool to have done FGS and Rootstech right together.12. I am proud of the presentation I gave to The Sons of the Texas Republic in the Woodlands, Texas.  13. A journal/magazine article I had published... this was not my privilege.  14. I taught several friends how to use FamilySearch's Family Tree and use the Search side of the website.15. A genealogy book that taught me something new was Guide to DNA Testing by Richard Hill.  16. A great repository/archive/library I visited was Clayton Library Center for Genealogical Research
17. A new genealogy/history book I enjoyed was "Grey Skies: A Civil War Legend of Family Courage" by David Self.  This historical fiction book was based on the family history of one of my collateral family members.18. It was exciting to finally meet many of my genealogy heroes at FGS 2014.  I had been blogging and tweeting with them as well as being Facebook "friends" for several years with so many.  Then to meet them and exchange hugs and chat was just great.19. A geneadventure I enjoyed was going to an old hidden cemetery with a distant cousin to see the grave sites of  my 4th great grand parents in Ray County, Missouri.  Totally off the grid.  We were taken in an old pickup, which we were holding our breath that it would keep running and crossed three fields to a spot that we needed a machete to clear our way... Outstanding adventure! 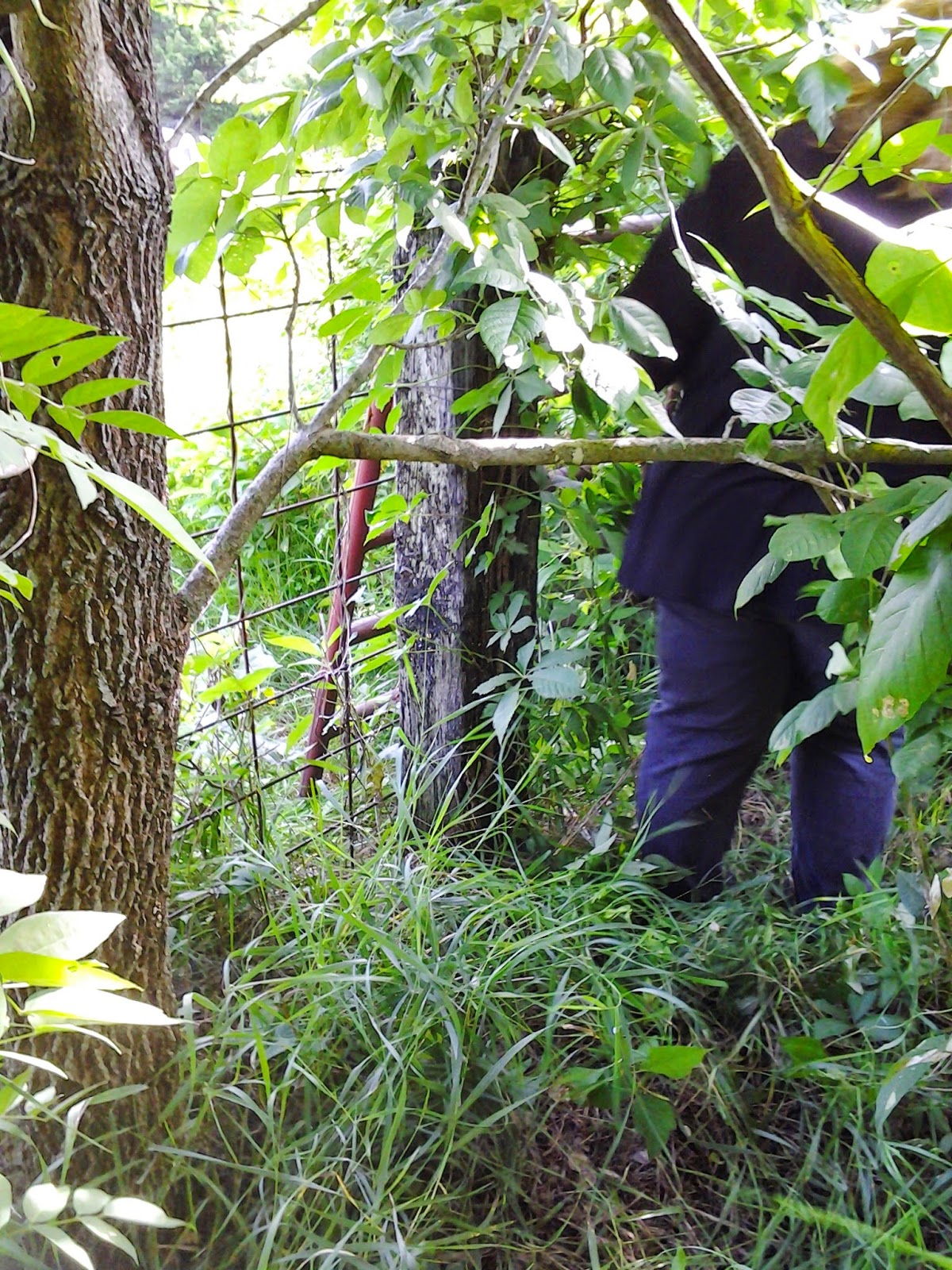 20. Another positive I would like to share is that this year, so many have donated time and money to different genealogy projects. It has been awesome to see how the community rallies around each other to help in as many ways as possible for them.

All in all, looking at it, it has been a very good year.  Thanks Jill for the prompt... it helped.
Posted by FranE at 6:03 PM 2 comments: