Sentimental Sunday The Hero Was Humble

Did you miss the Hero Story last week?  I did.  I forgot my own personal quote:"Sometimes you get so busy you have a hard time choosing which flower to smell...The trick is not ot allow things that are not essential to  block out that which is essential, so remember to STOP and enjoy the flowers filled with the sent of life." --The Hummer
This story was a painful one for the Hero.  It was not pain for himself rather pain for his child.
Have you ever been so upset and angered over someone's behavior you were ready to pick up and move?  This is where this event took the Hero.
Our son loved Boy Scouts.  He always looked forward to the yearly summer Scout Camp.  He had never had friends in his own troop, but at Camp he was able to make friends there.  His second year, we were apprehensive because some of the boys who were going had been ugly and physically abusive to him.
We trusted the leader and let him go.  When we picked our son up he told us that some of the young men had gone into his tent and had urinated on his sleeping bag, among other things.  He told us because he anticipated the boys fathers calling us, which they did.  However, the boys never apologized and the leaders never applied any disciplinary action other than telling the boys' parents.  They continued to assist them in getting their Eagle.
The Hero was incensed, he felt justice had not come forth for his son.  He went so far as to look into going 65 miles away to church, but our son said "No, dad, it is something I need to work out. We need to stay where we are supposed to be."  Of course, The Hero could have said you don't know what you are talking about, and taken us anyway.  We would have gone, but he didn't he was humble enough to listen to his son and learned from the example his son showed in forgiving and never saying harsh words about those who had tormented him.  He was humble enough to learn from his son. All turned out well for our son; he is a wonderful man.   I am thankful for both of them.

Email ThisBlogThis!Share to TwitterShare to FacebookShare to Pinterest
Labels: A Hero Story, Being Humble, Sentimental Sunday

Oops, I missed Follow Friday, but I have a great watch for a FamilyHistory Expo coming near you.

The next up and coming Expo is at Oklahoma City, Oklahoma (click on Oklahoma City to view the classes)  on April 11th.  The FamilyHistory Expo is a wonderful event.  It is affordable, wonderful classes, and how do you say awesome... oh right... awesome instructors.  You must go if  you are in the Oklahoma area or how about taking a trip for genealogy and be instructed while you are there.
I am attending a FamilyHistory Expo in Houston on April 6 and 7th, which is near my home so, I practice what I preach.

FamilySearch.org has begun a new Beta site to assist Ohio genealogy researchers.  They are thinking if there is enough response both for helping and utilizing, that they will add more states.  How many of you would like personalized genealogy help?
This is found on Labs.FamilySearch.org where you click on Research Assistance next to the Ohio picture and you are brought to this site :


Get Help with Ohio Research

Click on Get Help with Ohio Research and you will be able to view and explore the new Beta site.
Happy exploring!
Posted by FranE at 12:36 AM No comments: 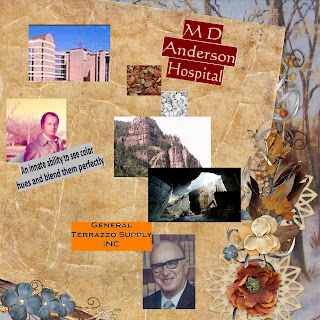 Sentimental Sunday The Hero Was Always There To Help

It was a pleasant month of May.  We took the Blue Van with all the children to go pick my daughter up to take her home from Brigham Young University.  We had fun exploring the Provo area and camping in Utah, it was beautiful.  As we started home, it actually was hot.  The first part of the trip was Interstate Highway 70 over to Colorado.  At Green River, Utah, we asked what the weather was like a head. At this point, we were in Short sleeves, shorts, and had the A/C on.  The truck stop said no inclement weather is forecast, should be good traveling.  We were not mountain people. We believed what they told us.

Wanting to get back to work, the Hero decided that we could take turns driving so we could arrive home by noon the next day.  We decided at Grand Junction, Colorado to take Highway 50 across to Interstate 25.  I would take the first shift driving and he would sleep since the roads were nice and not much traffic.  He knew that driving in the mountains was NOT my favorite thing to do.  It was pleasant driving until I passed Gunnison then it began to be drizzly.  Not too bad to drive in; I just slowed down a bit.  I was approaching Monarch pass when the drizzle turned into drops, then slushy drops, I was about half way up to the pass when it turned into SNOW!  I was not equipped to do this. My first instinct was to yell, "Hero"! "Wake up!"

He sat up with a jerk hearing the tone in my voice and said "What's going on?"  At this point, I could no longer see the road but if I pulled close to the mountain (the wrong side of the road) I could tell where it was supposed to be and there was a car about 3 links in front of me I could make out the lights of.  The wind was blowing the snow around, I said "It looks like a white out."  He immediately reacted with "Pull over". My response was "Where?"  It was obvious we could not tell where the side of the road was.  So he asked nicely, "What do you want me to do?"  "Pray!"  He chuckled and said "Yes, I will".  He did say a prayer for our safety, especially since we saw the car in front of us slide to a stop off to the side of the road.

As I drove, there were little puffs of wind that would clear my vision for a short distance through the pass.  As we started down, the Hero and the children awake sang hymns to soothe my tense self.  I went slowly. Then as we left the pass down, the snow slowed, and we met a BIG semi coming up the mountain. Prayers of thanks went up that we had not met him at the top.  The snow turned into slush, then drizzle until we got to the bottom and it wasn't even raining.
I was so frazzled that the Hero took over the driving, because he was keyed up from the experience.  He drove all the way through Raton pass, then woke me up for me to take over.
I was so grateful for his support and spiritual boost when I felt overwhelmed. Could not have done it without his presence.  I miss our trips.
Posted by FranE at 11:01 PM No comments: