I haven't any pictures of my Revolutionary War ancestor, but I am fortunate enough that he and his wife and children did draw pensions for his service.  I have first a summary of his service. 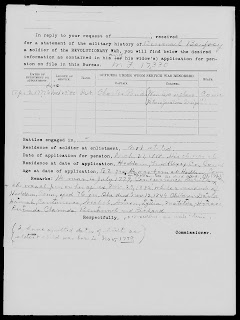 It puts him in the 6th Connecticut Regiment.  I found a description of the mission his company went on in May 1777, that he participated in.  (remember you can click on the image to enlarge it to read, the click back)

From Wikipedia, the free encyclopedia this is an example of where the 6th Connecticut Regiment under Jonathan Meigs and Samuel Parsons fought.
In May of 1777, they used whaling ships and sloopes to raid and rescue at Sag Harbor.  "Landing on Long Island they marched across to Sag Harbor, surprised the garrison, burned a dozen vessels, destroyed a large quantity of military stores, killed several of the enemy and took 90 prisoners, without losing a man. For this action, Col. Meigs was voted a Sword by Congress, which now hangs in the National Museum of American History in Washington, D.C.
After the Sag Harbor raid, the 6th Connecticut went to Peekskill, New York to join the other regiments of the Connecticut Line. The Connecticut Line wintered at West Point during the winter of 1777-1778. While there, they constructed the "Meigs Redoubt" and other fortifications in the area."


It is a blessing that the Continental men chose to fight for what they believed in.  I am grateful for the freedoms I enjoy today because of them.   My hope for the nation is that we will hold close to the beliefs and basic truths that the country was founded upon.

The graphic was from Graphic Fairy
The document was found on Footnote.com
Posted by FranE at 3:08 PM