Finding and Proving who was the son of Charles Gildon Jr

“I was wondering if you have any records of what happened to U.M. Gildon, first son of Charles Gildon and Elizabeth Massey?  One record by you states that he was a medical doctor in Henderson County, Texas. Also, Georgia death records state that his twin brother died at birth.  Is this correct?”

Only known published information on U. M. Gilden connecting him to Charles Gildon was by Judy Self Yegee[1].  “Now, again little nuggets, on the 1870 Henderson County Texas census I found U. M. Gilden, 28 years old, physician, born Georgia in 1842.  In the same household there was an A.P. Gilden born Georgia 1851, a retail grocer.”  In an addendum to the book she concludes this was the son of Charles Gildon left in Georgia.

John T Gildon wants to know if there are any records of what happened to U. M. Gildon.
The problem no research had been done confirming the relationship.

Limitations of the research many records are not online.

The following records were found online on Ancestry.com, FamilySearch.com, and Fold3:

Based on the census records, marriage records, and death records which are all written as Gilder and the location of J. P. Gilder, born 1817 Georgia, head of household in 1850 and 1860, it is unlikely this person is related to Charles Gildon born Connecticut, lived Chatham, Jones, and Twiggs counties.
There are no early marriages listed for Twiggs County, Georgia on FamilySearch.org the records start at 1845 too late for Charles Gildon and Frances Elizabeth Massey.
An excerpt in the Southern Recorder gives this:  Mrs. Frances Gildon consort of Charles Gildon died September 27, 1841 in Twiggs County at her father’s, Daniel Massey, residence.

From an article in the Macon Weekly: In Feb 15 1842, Mr. Gildon was reported as a missing man form Macon Georgia.  The article says he had been married, but his wife died shortly after giving birth to a son, for whom he continued to express the warmest attachment to.  This lets us know he did have a son before 27 September 1841, and he was still living 15 February 1842.  Research has not found this child in the 1850 census.  The family did not have knowledge of this marriage or birth until research in newspapers uncovered it. 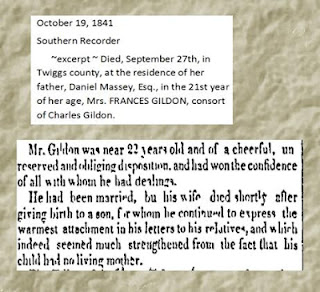 There isn't any evidence to link Uriah Mitchell (U.M.); born July 1841 Georgia as the son of Charles Gildon.  It would appear that Judy Yegee assumed they had misspelled Gildon as Gilden, thinking that the r was an n.  The name was always spelled Gilder.

The first search was be made to confirm the assertion of Ms Yegge that U. M. was in Henderson, Texas in 1870.  Once this fact is confirmed, the next step was to find him in previous and subsequent United States Federal Censuses, and other pertinent documents.

U. M. Gilden was found on the Texas 1870 United States Federal Census in Rusk, Precinct 5,
P. O. Box Henderson.  It is difficult to make out the spelling of the last of the name here.  His last name was indexed as Gilder. He was a physician and does have A.P. Gilder with him.

U. M. Gilden was on the Texas 1860 United States Federal Census in Tyler, Smith County with a J. P. Gilder as head of the household.  They were from Georgia, and A.P. Gilder was in the household. They were indexed as Gilder.  U.M. is 17 years of age and born in Georgia.

In the Civil War Soldier Service Records on Fold3 there are 14 records of U. M. Gilder as a Confederate Soldier in Texas with the 1st Texas Infantry from 1861 to 1864. The 14th card is the record of an injury in battle in Georgia, ‘minnie ball passed through the forearm between the bones’.  This caused paralysis.

U. M. Gilden was on the Georgia 1850 United States Federal Census in Fayette County, the 29th District with J. P. Gilder as head of the household. U. M. is recorded as Uriah M. age 9 years of age born in Georgia.

J.P. Gilder could be the Jacob P. Guilder who married Aletha A. L. Ponder in Monroe County Georgia. Found on FamilySearch.org.  This would match the J. P. and L.A.L. Gilder of the 1860 census in Texas.  L could be for Letha, she is also enumerated as Lucinda.  Jacob P. Gilder is on the 1840 census in Fayette County, Capt. Simmons District, Georgia.  They have a daughter, and are near U. M. Gilder in Fayette.  U.M. is also in the 1860 census in Tyler County Texas. He is the same age as Jacob.

Uriah M Gilder is found on the 1880 United States Federal Census in Coryell County, Gatesville page 423. Uriah is married to a Martha. 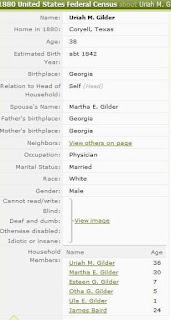 There is a Uriah M Gilder was on the 1900 United States Federal Census in Ellis County, 0023 Justice Precinct 3 (northwest part), image 2.  He is head of household, born July 1841, married 17 years, wife Eva, they have 1 child. The other child with them would be from Martha. He is listed as a farmer.

Death Certificate found on FamilySearch.com did not yield parents, name. He had committed suicide with a gun.  Data on the certificate was sparse. 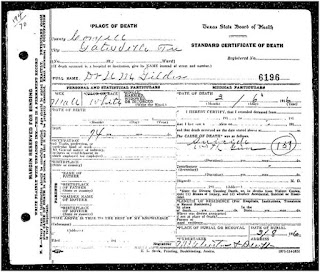 My Conclusion was U M Glidner is not the son of Charles Gildon, however, further information was needed.

Once again, an old newspaper held the answer.
Searching on Twiggs County, Ga. American History and Genealogy Project , I came across what I thought, at first, was repeat of the obituary for Charles wife, Frances Massey Gildon.  Instead,  it was the obituary of Charles's 9 month old son, Francis Massey Gildon. He died 4 months after Charles arrived in Nacogdoches, Texas. 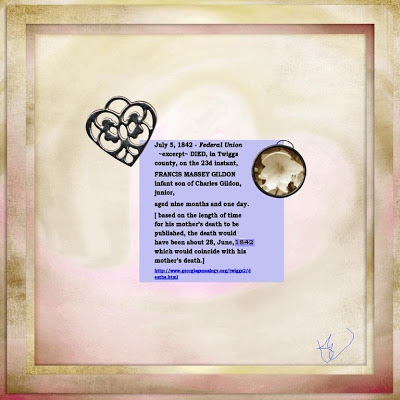 The long mystery of what happened to Charles Gildon Jr.'s son has been laid to rest.  I am glad that we have the correct child with Charles and Frances Gildon.

[1] Judy Self Yegge, Our Deep Roots and Tangled Branches, n.d.,  self published and printed as
requested.
Posted by FranE at 1:08 AM