A Great Example of Never Give UP

Smile for the Camera has an event for "A Noble Life". 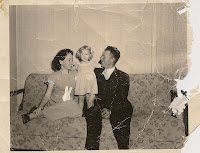 When I was 3 years old, my father was a starving farmer. My mother had pushed him to quit his job as a railroad superintendent, because she wanted him home more. After a year of trying his hand at farming it was quite evident that we would not survive. He heard of a job in Des Moines, Iowa as a Building Superintendent and decided that was a good alternative. He would go to Iowa, get stable and then send for us. He made friends with a local farmer, and one week end he went out to the farm with some other men to cut down a tree. It was in the winter. The equipment was an old two man chainsaw. It did not have a safety switch on it. They started sawing the large tree and soon it became evident the tree was not going to go where they wanted it to. They saw it start to topple in their direction and ran for cover not thinking to cut the saw off. My dad chose a smaller tree to get behind thinking it would shield him. He was not a professional logger. He saw the trunk slip, then with a loud thud as it cracked then it slid before beginning to fall. My dad said it was like a terrible disaster picture in slow motion. As the tree fell, its branches bent the tree my father was behind to catch him in the upper limbs. When it dropped, the tree he was behind acted as a sling shot, as its branches bounced back up slinging my father up into the air. When he realized what had happened to him, he looked down to see that he was headed straight for the running two man chain saw. It was going to cut him in half. Partly on self preservation and partly on instinct, he stretched his hand in front of him allowing the saw to amputate his finger so he could turn himself to save himself. It amputated his left leg at the mid thigh. The other men were in shock, so my father once again had to come to his own aid. He took off his belt and made a tourniquet and directed the other men to get the car and take him to the hospital. In a daze, they acted on his command. At the hospital, he assisted the doctor in cleaning the wound for surgery. 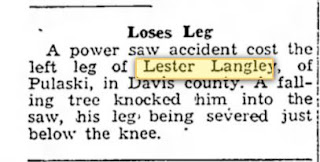 After the long road of recovery in the hospital, he obtained a job in an artificial limb shop while going through therapy. He loved the work, and fashioned his own leg which he wore for 15 years. However, the job had its down side in that it depressed him to see those that would not try to walk with their artificial limbs. He decided to return to Oklahoma and work in a hotel washing dishes to put my mother through College to become a teacher. While working there, a local hardware shop had become interested in air conditioners. The man and my father were great friends and soon, my father was spending hours in the back of the shop learning how to repair the air conditioners. Earl, the shop owner, heard of a program the state had for disabled persons for becoming an Air Conditioning and Refrigeration Engineer. My father was accepted and once again washed dishes in a College cafeteria while he and my mother went to school. We were dirt poor. 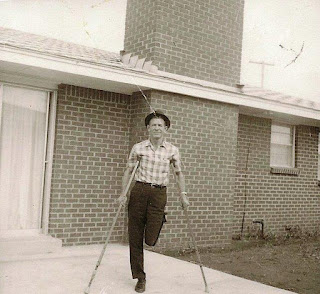 I never knew it until I looked back. He earned his Engineering Certification in Air Conditioning and Refrigeration and was accepted as head of the department in Maintenance of the the College he had washed dishes for.

I grew up friends with professors, and the College was my playground, because he always had me stay with him at work until he got off. He taught me perseverance, stamina, faith, and a belief you can become what you want to if you just try.
Posted by FranE at 8:26 PM