You Never Know Where The Answer Is

The Alamo Today
When I began the research on the Vance family in Mississippi, I was optimistic that I was going to be able to put it together quickly. A marvelous lady, Betty C. Wiltshire, has done enormous research and written volumes of books on the area. I found where Elizabeth Porter, shown below, was an orphan. Her father died in the 1840's, and her mother just a few years later. Elizabeth's guardian, John Vance, became her father-in-law. I searched and found where John Porter had lived in Pike Co. AL. Elizabeth was born there. That was where my trail ended. I would half heartedly search in South Carolina, where he was supposed to have been born, and I put out queries on the message boards. I received responses from her descendants, but none knew where her father came from. 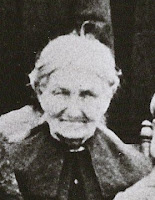 Then all my walls came down with a Texas Icon. The Texas Alamo. The picture above is what it looked like as I approached the front doors full of anticipation. A fellow researcher, on a related line that I knew nothing about, had emailed me and told me; my answers were in the Genealogy logs of the Alamo Library (I didn't know that they had a genealogy library in the Alamo. It would not have occurred to me to look for our Mississippi ancestor's information in a Texas Icon anyway.) I was to look for Joshua Smith's file. My husband and I strode up to the beautiful wooden doors, and pulled them open. There are wrought iron gates with an area where y

ou have to sign in to be admitted. The sounds of the city left us at the door and it was as if you were in hallowed halls. The librarian smiled as I told her what I was looking for and she said the genealogy of the heroes of the Battle of the Alamo were there. Joshua Smith was one of the defenders of the Alamo. Wow. She brought the file to me. Ned and I sat down and began to enter the world of Joshua Smith. He was a brave new Texan. He had come to Texas from North Carolina to make a life. He had purchased land in Montgomery County Texas not far from where we live now...how wild. He also had land where the refineries in Texas City are now. He loved Texas and had sent a letter to his mom and step-brother John Porter in Alabama telling them of his endeavors. Our mouths dropped to our chin. Ned, a Texas History buff, was thrilled.
We found that because Joshua had not married, his estate had to be proved by his only blood brother. David Smith had moved to Texas after his brother died and then had to proceed to clean up the records. As it turned out, John Porter was the second son of James Porter of South Carolina and Rachel Gist. James died when John was young. Rachel then married an Alexander Smith. They moved to Tennessee where David and Joshua were born. They moved back to North Carolina where Alexander died. Rachel then married a Solomon Laudermilk and they had 3 children. That was an interesting point of Joshua's letter to John and Rachel, he was sending money back to John to help him, as John had taken on the task of helping Rachel and the 3 youngest children because Solomon had died. Mercy. I would never have found all this out if David had not done such a thorough job of proofs. It was a buried treasure in the Alamo. Not only did we find out that Rachel had died before Joshua, but we found out the character and nature of John G. Porter.
The most interesting note was, we knew John Porter died in the 1840's, but not that he died in service of his country. David noted that Joshua died in the Alamo, a part of the Mexican War, and John and James Porter had gone to serve in the Mexican War where they too were killed. What a sad time for David Smith, he was left the overseerer of a large and disconnected family. All but Elizabeth and a sister Emily moved to Texas.
Now you know, you never know where the answer to your brick wall is. You just keep chipping away.
Posted by FranE at 10:07 PM