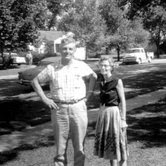 I don't think I ever heard him raise his voice, maybe say "now there Dora". This was my dad's older sister. Dora Langley who married the gentle giant Edward Grote. They had a small house a block from the court house in Pawnee. I say small, it was two bedroom with a summer room on the back. During the time before air conditioning when people would sleep out in a screened in room to keep cool during the summer.
They had a cellar (it was Oklahoma, you HAD to have a cellar). It was in the middle of the backyard within easy running distance from the house if the tornado warning came. Aunt Dora had canning shelves in the cellar. As kids, we would place King of the Mountain on the top of the cellar, and all of us knew how to retrieve food when sent.
We had many fun times at their house. When I was in first grade and my mother was away at college, Aunt Dora would take care of me while my dad worked. Uncle Ed, the gentle giant, would pick me up and take me home after school.
When they grew old, she developed colon cancer. She survived it, but the chemo made her cardiovascular system weak, and she died of a heart attack 6 years later. The gentle giant was lost. His fairy was no longer there to perk him up and make him laugh. 12 years later he took his life. No one knows why, but there was a sadness in him after his loss, that never went away.
Posted by FranE at 11:13 PM