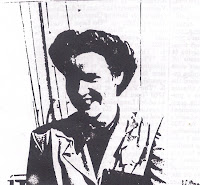 I was inspired early in my genealogy research by a wonderful lady called Judy Self. When I was starting by asking my aunts for information, one went into her closet and brought out a letter from a "cousin" several times removed. The letter was a standard request for information on our family as it related the Selfs and the Gildons. I was intrigued and answered the letter my aunt had tuck away. It was wonderful when I received a long letter from and enthusiastic genealogist. She was full of knowledge of the family and freely shared of it. She sent me copies of letters she had from correspondence with various family groups. She had started out researching her line of Self, and then the Gildons and from there she just blossomed. She did not just cover the pedigree's; she also included shared stories, some of her own speculations, documents that she had hand transcribed at a time digital cameras, and copiers were not on hand. After about 2 years of correspondence, she sent me a letter that she had finished a book and was offering it to people for the cost of printing it.
At the time, I was dirt poor and had just had my 4th child. I had to decline, but we continued to correspond. About 5 years later, I knew I would be in the state she lived in and asked permission to stop by and meet her face to face. She graciously said yes and I went by. It was the shortest 3 hours I ever spent. She asked if I would like to take the book and make copies of it then send it back to her. WOULD I! She loaned it to me and I made copies of the 755 page book. I still look at it sitting on my shelf and marvel at the information she compiled during her research. She was a model at finding family and pulling stories out of them. She hand typed the book on an old type writer and as I found out when I made the copies, she only charged for the cost of printing and shipping the book to anyone who wanted a copy. It was not an ego trip, she freely gave and thought how important it was to share the information she had been given. It was a great example to me as I have tried to continue the tradition.
Due to health issues she doesn't get out to research any longer, but she keeps in touch with her fellow researchers and passes along any new findings. How grateful I am to have had her as an early mentor in developing my methods and open mind research and generosity in sharing. Hope you had someone as inspiring as I did to help you get started. Lori has been that type of person on the blogs for me too. Thanks a bunch.
Posted by FranE at 10:18 PM