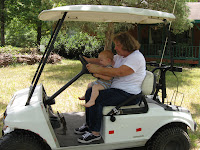 Usually my focus is on the past, but I thought that today I would come back to the present and introduce you to my second daughter and her funny bunny little boy "Little Red". He is called that because his dad is Big Red. They are two peas in a pod.
The picture on the right is me being silly with the boy. He loves climbing on anything that goes. Don't all boys? I had, as my son said, been silly and forgotten where the switch was to turn on the golf cart. (We have a golf cart to visit the back of the "farm".) So, I was making motor sounds, and he was driving as fast as he could go. It was fun.
Of course if you come out to the country, you have to go get the mail at the mailbox. Ours is really southern, it is covered with a hummingbird vine. Can't you just feel the heat of sun looking at this picture. 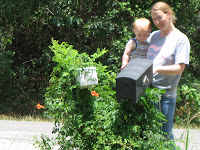 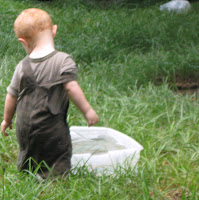 Next, Little Red decided to explore the dog's tub of water. Our half Lab, half Siberian Husky drinks gallons of water right now since it is so hot. I got a large tub, since I am gone to work during the heat of the day.

First, he spent some time sizing up and studying the water tub, then he decided to climb in, backwards of course. 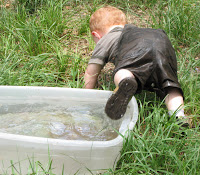 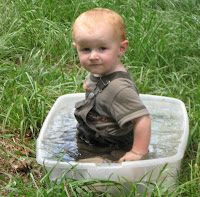 Here he is, completely in, sitting pretty, and cooled off. It was 95 degrees outside yesterday.


After he had cooled off, he decided to go on a excursion to the garden to see what his mom had been doing. First he peered into the depths to see if there was squash under the leaves. As you can see from his expression, he was not impressed. 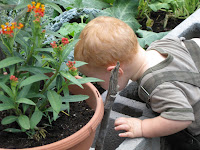 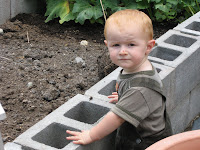 I had an day of fun with a little boy that is very special to me. I hope as he grows that the relationship will grow too. The memories made will be fun to look back on as he becomes a man.
Posted by FranE at 9:20 PM