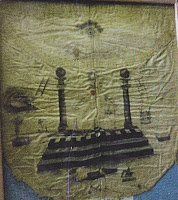 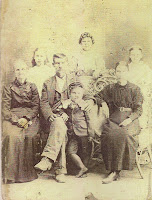 I made a post earlier about having found controversy over the apron at the right.
The elderly lady on the left of the picture is Mary "Bride" Thorn Self. That too is controversial, because researchers can not agree as to her middle name. The only concrete information is that her initial was the letter 'B'. Whatever the outcome on her name, it is blatantly known that she was a caring woman who loved her family. She traveled from Alabama, to Texas, to Oklahoma with her family. She kept safe the Mason's apron that belonged to either her father Thomas Thorn or Great grandfather Thomas Thorn, who came from England (the other controversy). The original owner had hand drawn the figures that you see on it. It is my understanding that Mason's do hand draw the figures as they progress in their growth in the organization. This is another example of personal work being preserved. If you right click on the picture, it will open the picture in another for you to be able to see the figures.
However, long term preservation of an artifact was not well understood by my family. Mary passed the apron to the daughter on the left in the picture, Emma Self Gildon. Emma then passed it to my grandmother's family. My grandmother is the young girl in the center in the back row. Her name was Lenorah Gildon Langley. She passed it to my cousin who had it mounted on a piece of cardboard (I can hear some of you cringing) and placed under glass. When she gave it to me, the silk (it was not on lambs skin as I had heard) was beginning to yellow and deteriorate, because the cardboard was attacking the silk. We had it removed and archived by a professional in an acid free library box. It now resides in a dark dry place, which bothers me. I keep thinking it needs to be available for viewing by the rest of the family. Does anyone know, if the Masons were to have the apron, would it available to the public for viewing?
Posted by FranE at 7:14 AM