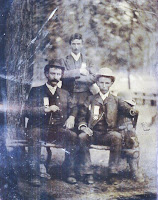 The SACKLEY BROTHERS BORN IN Napean, Carlton, Ontario.
I know that Wednesday is supposed to be assigned to something, but I didn't realize that July 1st was Canada's Independence Day. Show's you what I remember from HS World History class.
I learned from, of all places, the Old Farmer's Almanac site that July 1st is set apart as Canada's birth. It happened on July 1, 1867 when the British North America Act established out of the colonies of Canada, Nova Scotia, and New Brunswick, dividing it into four provinces, Ontario, Quebec, Nova Scotia, and New Brunswick. I wonder if our ancestors earned their medals in the rebellions? 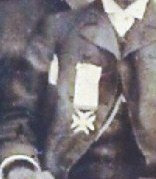 I have been unable to place these medals. I think the pictuce was taken in the late 1880's
I also said...no wonder I have such a hard time finding them, the provinces weren't even provinces when they were there. A whole new mind set for me.

Canada’s birth in 1867 was the result of years of hard work by the Fathers of Confederation.

I love our Canadian Families, and I am glad they had the same joy of earning their independence that my Colonial Families did in the United States.
Posted by FranE at 9:50 PM