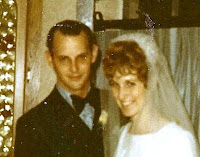 When the Hero and I first got married, showing that I could cook and be domestic as well as be a nursing student was important to me.  Our first night home from the honeymoon, I decided to make homemade biscuits, and chicken fried steak with gravy.  Sounds easy enough.  I will digress, when one cooks, one should be familiar with their ingredients.  Moving on with the story.
I was discouraged when the biscuits came out of the oven looking like, hmmmm, hard tack baby biscuits.  How was I to know that whole wheat flour does not rise like white, and who knew how old the hero's baking powder was!

In essence, the dinner was  a disaster.  The meat and gravy were passable.  While he put on an encouraging face, and didn't say anything negative, it was pretty evident that it was an effort to make it through the meal.
He went to his office while I cleaned up.  Low and behold, under his napkin, I found his two biscuits.  I felt humiliated. I was crushed.  I summoned my courage, went in and said..."Why did you hide the biscuits under your napkin where I would find them and know you didn't eat them?"  He said, "So you could find them and know I cared enough to hide them so you would not be hurt."  What?  My idea of chivalry was you grin and bear it as you chomp through the hard tack saying "it tastes fine, dear."  His idea of chivalry was you smile, hide the evidence in a soon to be found out spot so the person knows you didn't want to hurt their feelings.  I don't know about you, but I was a bit confused.  What ever his strategy was, it worked, because I gave him a hug, and told him he was wonderful.
For the rest of our married life we would occasionally look back and giggle at the hard tack biscuits.
Grandchildren, the lesson of this story is always ask clarifying questions, don't jump to conclusions, and have a sense of humor.  :-)
Loving deeply and laughter can see you through rough spots while you are getting to know each other.
Posted by FranE at 2:18 AM