Sentimental Sunday The Hero and Taxes 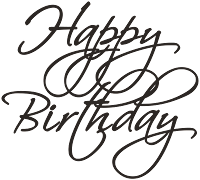 To begin with it is my daughter-in-law's birthday!  Happy Birthday sweetie! (they always drop by)

While visiting with my daughter about the date, and the fact it was normally the deadline date for taxes, she started laughing and pointed out this was usually the date the Hero would go do to the airport to mail the tax reports, because it was the latest pick up in Houston.  That brought back some memories.
The Hero had a terrible experience with the IRS early in his business career.  His trust level of the IRS remained low all his life.  I ended up always doing our personal taxes.  That is a separate story.
Working as a bookkeeper and as a comptroller for several companies, he would wind up with his tax reports on the last day for filing, or decided to file an extension.  He decided they had less chance of being audited if it was filed later in the year.  (That being said, he went through two audits that I know of and his books always passed with high praise from the auditor, and even received an official letter of praise from the State of Texas. )
Back to the trips.  He would work either at work or at home until it was the last minute we could make it to the air port, then we (I would ride with him always...  Is it any wonder my oldest daughter would worry something would happen and she would be left with her siblings to raise?)  would drive 1 hour to the Houston Airport and mail the report or extension at 11:30pm.
It was lonely today after my visit with my daughter, no Hero to talk about the fact they are trying to take away the Homestead Exemption Taxes in Texas.  He would have had at least one opinion if not a heavy long dissertation on why that would be wrong. I have heard them before. I miss those talks.
Well since it is a Sunday, IRS taxes due date has been extended to the 17th.  The Hero would have breathed a sigh of relief.
Hope you relaxed today.  I did. : )
Posted by FranE at 8:39 PM

Email ThisBlogThis!Share to TwitterShare to FacebookShare to Pinterest
Labels: Sentimental Sunday, The Hero did taxes