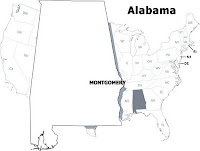 I have been in the southern part of Alabama, numerous branches were from there. My first challenge had been my mother-in-law's (I call her MOM) family. She had been raised until she was 9 by her grandparents. She had not even been given anything to remember her grandparents. (I was given this picture by a distant cousin that had not spoken to my MOM since she had married outside of her church.) Her mother had not talked of her heritage, and her memory of what she had learned from her grandmother had faded.

The man in the picture is Henry Crawford Reynolds.
I found out Henry's father and mother had come to Alabama from Georgia. I always thought that the Crawford would be a name carried forth by the mother's family, but so far, no proofs of that. His mother has been a bit of a mystery for me. I am sure her father was John White and the mother Nancy, but I need more than the census I have found to completely confirm my feelings. Martha Ann Maloura Wells on the right was a wonderful example to her granddaughter, and I have loved listening to Mom talk about Martha's methods of gardening, canning, and provident living. Henry was a country doctor. While he was a doctor for the railroad in Wharton, TX, his earnings from the people in town were many times in the form of food. Martha grew up near Abbeville, Henry County, Alabama during the Civil War and told some stories of life at home while her dad was fighting for the South.
My father's family came from the northern part of Alabama. Jefferson, Blount, and Morgan counties. They are a fascinating bunch. The Selfs descended from a healthy ancestor that apparently lived past 100 years old. That is where I developed my thought of living to 120 years old. (It was easy to say when I was younger, now that my sweetie is gone and I am achey, I am not quite sure how that ancestor did it "back in the day". The Hughes that married the Thorns who married the Selfs were all there. The two Hughes men only brought their families to Alabama. They were both killed apparently in the "Black Hawk War" just after purchasing land and moving to Alabama. The Thorns are the family that I have been able to trace back to Virgina. There is a mystery associated with them though. I have inherited a Mason's Apron that I will share about in a future post. The family information handed down was that it came from England with the first Thomas Thorn. "Experts" on Mason Aprons have said that it could not be because he came in the late 1600's and the Masons did not come to the US until the 1800's and then it was to South Carolina. That being the case, it may have been three generations later coming into the family. Oh well. It is old. I wish that some of this family had kept pictures. I don't have any of these at all and they were secretive. Must have been early day conspiracy theorist. Mercy me how I love these people. Back to my widened approach. I have only used census and land records to pin point this branch of my dad's. Today I went blog searching and found a Hughes Family Tree from Morgan Co., Alabama. I have emailed the blogger and found out that their branch is heavily into DNA. That is not something I have looked into since I am a woman and know that DNA for females is not as pinpointing. They are going to see if our tree might fit into their DNA testing. A whole new world of genealogy. Gosh! I love doing research...hard on my house cleaning though. Nite.
Posted by FranE at 9:57 PM