A Genealogical Delima for Some

My sweet daughter married a young man of the last name.  There were many raised eyebrows and titterings about cousins and such.  The funny thing is they may be back in Ireland or England in the 17th century.  The Aylwards of my son-in-law came over to the United States in the 1700's.  The Aylward of our line came to Prince Edward Island in the early 1800's.  Before my daughter even met her future husband, I had researched his line because I had read they were from Prince Edward.  Research revealed that yes, they did but it was Prince Edward Province in Quebec Canada, not the Island.  Our family had immigrated straight to Prince Edward Island and stayed.  It was in 1891, that Edward Aylward immigrated to Chicago.  That is a naturalization I still have not found.  Both family changed their names to Ellsworth when they came to the United States to further complicate things, and no reason for either family. 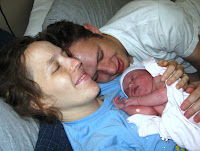 Well, this is my way of introducing my newest granddaughter Em.  She is beautiful as you can tell in the picture with her mom and dad.  They were of a pioneer spirit and had Em at home.  She was born at 6am this morning. I will say I always get excited and teary eyed when a baby is born, but watching the home birth brings home to me the precariousness of the moment of birth.   I have had a ball caring for them this day.